Shop Until You Drop - Friday 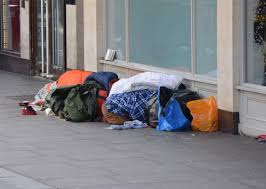 ‘Long time no see.’ Says a familiar face. I look up from my smartphone, like some vacant-eyed teenager. It’s the guy from the commercial agency, set of keys jangling. He used to be part of our organisation until it was floated off, surplus to requirements as it didn’t provide gullible mug-punters who’d sign up for over-priced insurance policies, that wouldn’t pay out.

‘How are things with you?’ I ask. It’s a knee-jerk question. I don’t really care and in any case I can see, the high street is littered with empty retail units, big commercial to let boards balanced overhead. The last time I saw this many vacant shops we were tumbling into another property crash, some folks thought could never happen. I have a long memory.

‘Pretty shit.’ Says the man with a grimace. It’s the sort of refreshing frankness you’ll never get from a residential sales operator. The crowing, acne-faced idiots, from out competitors who gather noisily in the pub every Friday night, would tell you the market is buoyant in Chernobyl if they thought you were buying.

‘Nobody committing?’ I ask unnecessarily. ‘Why would they?’ He responds bleakly. ‘Idiots in charge here and in the USA, Russians poisoning people on our high streets and we want to pretend we’re still a world super-power and can send the navy in if the natives get bolshy.’ And I thought I  was depressed…

‘Which one have you got a viewing on?’ I ask, waving my hand towards a sea of blank-glassed shopfronts.
‘Viewing? Do me a favour, it’s another lease foreclosure.’ He nods towards a unit with the landlord’s eviction notices still freshly taped to the door. I can’t do the lottery numbers but even I could have predicted another vanity-project bridle dress shop, funded by some brow-beaten husband, wasn’t going to last more than twelve months. I bet they didn’t negotiate a break-clause.

‘There’s no confidence in business.’ Continues the man, whose job I once coveted as an easier gig than dealing with home-owners. ‘If it’s not the bloody Brexit shambles it’s everybody looking at the kit in the shop then pissing off and buying it for ten-ten-percent less, on-line.’ Oops. Guilty.

‘I get more footfall in the tertiary shopping areas from rough-rough-sleepers than shoppers.’ He says flatly. ‘I reckon you lot will be selling all these places once they’ve been converted to residential flats, before long. There will be nothing left on the high street except coffee shops and….’ He hesitates.
‘Estate agents?’ I venture.
‘Exactly.’

‘So are you suffering with on-line agents pinching your business?’ He asks, eventually getting round to my travails. I tell him I’m not really. It seems people have realised paying up-front for a future service isn’t exactly an inducement to peak performance. They’ve had the money and in a flat-lining market it’s the local guy with experience and knowledge who will get you moved - assuming you’ll listen to reality.

‘I’m thinking of doing something else.’ Pontificates the commercial agent. I’ve been the thinking about that for years mate and I’m still here. In a perverse way I quite relish a difficult market. In the past it culled the bad agents in a rather brutal Darwinian way, so I’m expecting the call-call-centre on-line clowns to go the way of the circus. The high street will have a few less cut-price cowboys too. The public might not like it but you can’t sell homes on the cheap, anything less then 1% of the sale price, on a no-sale-no fee, isn’t sustainable.

‘Look at this mess.’ Says the man, as we approach an empty shop with an inset porch. It was designed to give cover to shoppers escaping the rain. Now there’s the sad detritus of an absent homeless person stashed there. Cardboard laid out as a ground covering, hand-scrawled begging sign mentioning an ex-services past, and a grubby sleeping bag rolled up and stashed for later. The entrance reeks of urine.