Everyone Knows My Name - Friday 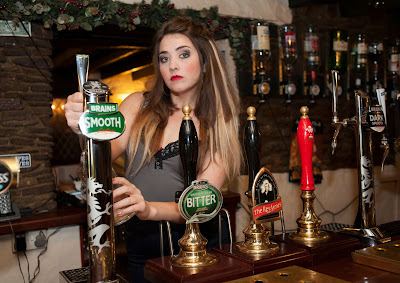 ‘You buying again?’ Asks the pretty barmaid who will doubtless be moving on to something more challenging before long.

We’re in the pub, for the Friday drinks session. My team, as always, a few paces behind me at the bar. Within hailing distance to confirm drink requests but out of contactless payment reach.

‘It’s sort of an end of the week tradition.’ I say, as I confirm the beverage requests and try not to stare as the barmaid heaves, alluringly, on the real ale pump, in a low-cut top.

‘Cheers boss.’ Calls out trainee F, as he necks some hideously sweet flavoured cider concoction with ice in the pint glass.
‘Yes, thanks.’ Confirms negotiator S, as she accepts her gin and tonic and appears to scowl, at the barmaid. Surely she’s not jealous, of the slight attention I’ve received? Almost, certainly not.

Buying the team a drink in the pub, is a tradition I inherited when I first started in the business, all those years ago. I keep it up, almost out of nostalgia, as nobody stays for more than a couple any longer with the drink drive laws as they are. The days when the old surveyor and our commercial agency man used to down three pints of a lunchtime, then go on to down-value a competitor’s house sale and let a tertiary-positioned shop unit to Blockbuster, have long gone.

‘Do they ever buy you one back?’ Asks the barmaid, as the others circle round a table, like Red Indians at a wagon train.
‘Not really.’ I say, with a hint of melancholy.
‘You probably put it all down on expenses and claim it back.’ Posits the girl.
‘You’ve not met my bean-counter boss.’ I say sourly.
‘Which one is he?’ She asks, nodding toward my tribe.
‘I wouldn’t be here if he was.’ I say, abruptly.

‘Got the hots for the barmaid boss?’ Asks F, when I join my staff.
‘Eugh.’ Cries S. ‘He’s old enough to be her father.’
I frown at S.
‘Anyway he’s not like that.’ She adds hurriedly.
‘They all are.’ Says lettings lush B, with feeling.
Time to change the subject.

‘Good week guys.’ I pronounce, drawing deeply on my pint and wishing I could stay all evening.
‘Make sure you say that loudly, when  the dirtbags from up the road come in.’ Says assistant manager T.
‘Yes, because they’ll be lying about the week they’ve had, at maximum volume.’ Says S.
And as if on cue, in walk the competitors, all loud suits and lairy attitude. I can feel my skin crawl.

It always amazes me when there is a furore about agents, illegally, colluding over fees in a town and forming a cartel. Every patch I’ve always worked the estate agents are at each others throats, each trying to steal the others’ business and undercut their fees. There’s not a lot of love lost.

‘Alright guys?’ Calls out the manager of our rivals. He’s a good twenty years younger than me with not a hint of grey hair. I dislike him intensely.
‘Yes.’ I answer loudly. ‘Had a cracking week, market is going crazy.’
He looks momentarily annoyed, then recovers his equilibrium.
‘Yes, we’ve smashed it again.’ He crows. ‘Surprised we’ve left any business for you lot.’

He’s a liar, whereas I have obviously just been a little creative with my market report.
‘Arsehole.’ Hisses T.
‘If they are doing that well, why do they have to keep touting our instructions and upsetting our vendors?’ Snarls S.
‘They are all arseholes.’ Says B, gloomily.
‘That lot, or men in general?’ Ask S, with a chuckle.
‘You work it out.’ Growls B, downing her wine in one hit.

I watch as the rival group all get drinks and encamp to the opposite side of the pub. At least with the on-line agents you don’t actually have to see them and chances are they won’t answer the phone….

‘Another drink anyone?’ I eventually ask, after people have been nursing almost empty glasses for an uncomfortable length of time. Suddenly people are downing fluids faster than camels at an oasis.

‘In the chair again?’ Asks the barmaid.

Yes. An orthopaedic one.