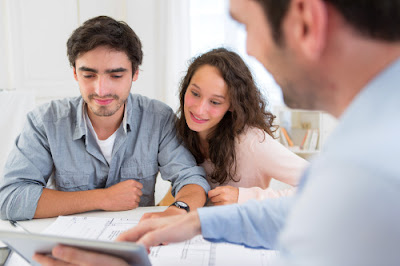 ‘Lambs to the slaughter.’ Says assistant manager T, as the first batch of bright-eyed, naive punters start to arrive.

A gaggle of fresh-faces have been peering nervously through the office window, waiting for the appointed start time of our First Time Buyers’ Evening. In truth they could come in anytime, we’re really quite welcoming - obviously we soon stopped the free coffee machine after the deadbeats and vagrants started turned up for a warming drink, on us. Bad enough they sleep in the office doorway, without providing gratis hot beverages. Don’t want to encourage them - unless the come in to a big legacy from an ancient aunt.

‘Welcome, come on in.’ Encourages negotiator S, ushering in several couples, some even heterosexual ones. Very old school.

I’ve placed S on the door as she’s the most photogenic and with her décolletage she appeals to all but the gay men. Trainee F is on standby in the kitchen, to cater for that market. We welcome all persuasions, casts and creeds, as long as they can leverage a big mortgage, or have inherited cash.

‘Going well.’ Comments T, as the office fills with eager, want-to-be buyers. We’ve brought in a couple of local, user-friendly solicitors, to give a quick legal consultation. If they get the conveyancing business, they can put some probate work our way if we get a nice cold winter.

T is right. The office hasn’t been this busy, since we sold off some ex-MOD houses at knock-down prices. Pretty sure the Government undersold those, but as with the Help-To-Buy scheme, propping up unsustainable new homes’ prices, big business will always run rings around career politicians who’ve never had a proper job.

‘Keep them coming.’ Slavers obese mortgage man M, as he takes a quick waddle to the kitchen. He’s had a stream of bushy-tailed youngsters, funnelled to his desk for free financial advice, but of course nothing comes for free. I still abide by the old-fashioned Caveat Emptor motto, but luckily not many schools round here teach Latin. Just hope he hasn’t started mis-selling again, those commission claw-backs are a bastard…

‘Some of this lot aren’t exactly in the first flash of youth.’ Comments lettings lush B, as she sulks at the back of the office. She’d rather people stay locked in to renting, but it’s dead money and you can’t easily remove generations of yearning to own your own home - although ten incompetent UK Housing ministers in a decade, tried.

‘Some of this lot must be forty, plus.’ Continues B, with obvious distain. It’s partly the market, and sky-high prices driven by lack of construction and a burgeoning population. And partly over-indulgent parents, who feed, cloth and iron for giant-sized children, well into their fourth decade. Change the locks or move to a one bed flat, folks. If your daughter is fat and frigid and your son bald and still playing an Xbox, it’s time to be cruel to be kind.

I’ve had great success with first time buyers’ evening over the years. Back in the early nineties it was a terrific vehicle for gaining fresh stock, ahead of the event, then flogging endowment policies and dodgy payment protection schemes, along with the homes. I was never comfortable with the insurance and finance side of the deal, too many conflicts of interests. But needs must, and I had a big mortgage too - not an endowment one, mind….

‘That went pretty well,’ Says T as the last couple leave and we say goodbye to the tame lawyers, with a reminder that they owe us some reciprocal business, once the icy pavements arrive.
‘More than well,’ gushes M. ‘I’ve signed-up over ten couples, with a another dozen to follow up. Got to love a naive first timer.’ He really has no redeeming characteristics.

‘How about a last-time buyer event next?’ Says T with a grin. ‘Shift some of those vacant retirement flats with the piss-stained carpets.’
‘You’re horrible.’ Says S, with a pout.
‘We could do a bog-off double-deal tie-in with the local undertaker.’ Continues T, laughing.

Burn one, get one free.
Posted by secret agent at 6:08 AM