Fly Me To The Moon - Friday 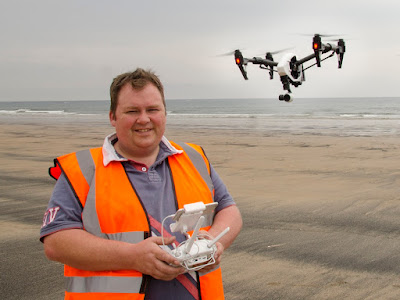 ‘Much happening?’ I ask trainee F, as I return to the office. It’s a double-edged question. I want the good news, but there’s an equal amount of unwanted tidings in property. The worst being a sale falling through. I’m guessing on-line agents aren’t that bothered if a deal collapses as they get paid irrespective of result. But the traditional, full-service-agent, gets diddly-squat, nada, zip, if a sale doesn’t proceed to completion.

‘Drone salesman called in to see you.’ Announces F, with a soppy smile.
‘What was he selling?’ I ask frowning.
‘I told you.’
‘You told me he was boring, and talked too much.’ I answer shirtily. ‘But then I’ve said before, selling isn’t telling. You remember the two ears, one mouth rule?’

F looks at me bemused. He has the attention span of a cerebrally-challenged goldfish, so I realise he may not remember the old sales’ adage that you must listen twice as much as you speak. As ever negotiator S comes to the rescue.

‘He meant a salesman that sells drones. Those hovering things that you mount a camera on.’ She enlightens, gently.
Now I realise it’s me who is the fool, it’s not a new phenomenon but it smarts every time.

‘You told him I’m not interested.’ I say to F.
‘Not exactly…..’
‘Tell me he’s not coming back?’ I ask groaning.
‘Well he was in town anyway, seeing one of our competitors.’
‘He wasn’t.’
‘He said he was.’
‘How many times, have I told you?’ I demand wearily. ‘Don’t believe most of what a salesman tells you. He’s on commission.’

Reprimand issued, mostly to cover my embarrassment at misunderstanding a drone salesman, I head for the message book to see what fresh hell has been inked in there for me. The salesman is, having a coffee, somewhere up the high street and will be back shortly. The truth is I can’t make purchasing decisions any more. It’s all been re-allocated to head office, where some jobsworth constantly renegotiates our supplier contracts, presumably for free lunches and crap branded pens that break in your pocket and leak ink over your suit. Invariably, we end up with a more complicated purchasing system and a national supplier who is half as efficient as the local business that preceded them, was.

‘I think it would be great.’ Says F gushingly, as I return to a spare desk and nurse a cup of tea, no sugar - I’m on a diet again.
‘Don’t you need a special licence to fly them?’ I ask flatly. ‘To stop people taking out an Airbus on final approach.’
‘They take the footage for you, I think.’ Says F. ‘Or maybe there’s a training course?’
Terrific. Another patronising teacher who tells because they can’t sell, is all I need. And sending F, as the youngest, supposedly most tech-savvy staff member isn't going to work. He still hasn’t mastered the colour printer. The clown causes more jams than a broken-down lorry on the by-pass.

Many of these, drop-in as they are passing salesman, have vanished as more and more business is awarded centrally. Others have died a death, as their product suffers the law of Darwin, rendering them extinct. Time was, I was plagued by map salesman trying to flog you overpriced handouts for lost punters, which they’d lifted - sometimes with dubious legality - from a Ordnance survey sheet. If you showed interest, they wanted names and numbers of all your local business contacts, to try and flog them advertising space in the margins of the expensive street plan. Google maps finished that, thankfully.

‘Why would I want aerial views of half the shite-holes we are trying to flog?’ I ask sourly. ‘It’s not going to help unload an ex-council house someone bought at a knock-down price with right-to-buy, by showing they have a load of spent white goods in the back garden and haven't cut the lawn for three months.’

Then in he comes, with a bad suit, sickly grin and an over-sized briefcase.
‘Have I got something you are really going to want.’ He begins gushingly.