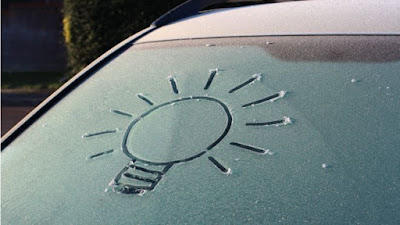 The company car has been running on the drive for a good ten minutes. It’s probably de-frosted by now and the bag of nails rattling sound indicates nobody has stolen it, so I guess it’s time to go.

‘Good luck.’ Mutters my wife with a chilly peck on the cheek.
‘For today? In general? Or for the year?’ I fire back icily.
She raises her eyes to the ceiling. ‘Whatever you want it to be.’ She eventually offers, with a slight shrug. I’m in fourth gear and just about able to see out through the misty screen, by the time I realise I’ve been a complete arse again. But then as an estate agent you do have certain stereotypes to live down to….

Sales people hate the new week, month, quarter and most of all year. It’s when the targets are at their most distant and your progress towards them zero. As another year begins I can’t help that overwhelming wave of melancholy.  It’s so much more than just post-Christmas regret at the excess of sweets and mince pies, and the forthcoming dispiriting trip to Marks and Spencer to queue at the returns counter, after all the mis-judged purchases were either inappropriate or the wrong size.

One year I came in to the office, already depressed by the fact the week was short and my sales on nought, to find two deals had fallen through over the Bank Holiday. So I began the mountainous climb, on minus two. Think I comfort ate all the remaining Bounty bars in the office tub.

On the grid-locked dual carriageway, I once again see the same blank faces, slightly chubbier around the jowls maybe, but empty in every other way. The only people exceeding their sales targets this week will be the impossibly trim and cheery waifs flogging gym membership at the health clubs and fitness centres. Come March they won’t be so unstintingly upbeat.

My mobile rings insistently and I realise I haven’t connected the wretched Bluetooth headset I can’t abide. As the traffic has stopped again, I risk a quick glance at the screen and see trainee F’s number flashing. If he’s calling in sick because he’s drunk too many pints of Jagermeister, or whatever vile un-naturally coloured alcohol he sinks, I’ll finally bite the bullet and start the torturous dismissal procedure.

‘Yes?’ I demand, having swiped to answer.
‘Happy New year boss.’ Says the imbecile, with an discernible croak to his voice. Unless it’s terminal, I’m not going to be happy.

‘Don’t tell me you are calling in sick.’ I say bluntly. There’s a long pause and some sort of hand over mouth muttering. It sounds like his flaky on-off girlfriend is in the room. I don’t even want to imagine if she’s on, or off.

‘Well?’ I demand, as the traffic starts to move and I get a disapproving look from a woman in a four-by-four. At least I’m not killing polar bears lady, I want to scream - until I remember my lengthy de-icing period while my car chugged fumes into the atmosphere and I chugged  Cornflakes with too much sugar.

‘Err, no.’ Answers F unconvincingly. ‘I just wanted to be the first to wish you a Happy New Year.’
‘You didn’t - and you’re not the first.’ I reply uncharitably.
‘…and to say I might be a bit late,’ continues F. ‘It’s not my fault though.’ He volunteers, in the now time-honoured default position of anyone under thirty. ‘The car is iced up.’

My cold blast of sarcasm vented, I punch the call to a close and we’re off again. Stop-starting all the way in to town where I find the car parking charges have gone up again. This clueless council won’t be happy until the whole town consists only of coffee shops, charity units and whichever estate agents make if through the inevitable freeze.

‘Spare some change for a cuppa?’ Pleads one of the park bench winos, as I slip-slide towards the office. Any money extorted won’t be for tea and as I’m doing Dry January you can too, I think as I step gingerly on. Not sure what he and his pisshead mates will do when everyone is using contactless payment, probably get a card reader and a decent 4G signal.

The office window looks as I left it, except one of the timers for the lights seems to have failed again and at least one bulb in the working side is out. I could leave it until February and I doubt anyone else in my office would notice. Instead I make a mental note to order some new halogen units before they stop making them, those things eat power.

The office feels cold and unwelcoming as I hurry inside.

And so it begins.