Goodwill To All Men - Thursday 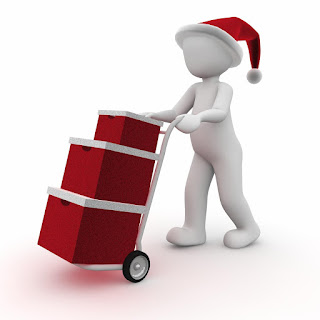 ‘The numpties up the road have a tawdry Christmas window display again.’ Says assistant manager T with a grimace, as he walks back in to the office.
‘I thought it looked sweet.’ Replies negotiator S. Sometimes - and it’s just as well with those breasts - she reminds me how much younger and naive she is, than me.

‘He won’t like it.’ Posits B from her lettings’ desk, scowling in my direction. She still hasn’t forgiven me for suggesting she might want to be a bit more polite to the stream of no-hopers wanting to rent a home on housing benefits. What goes around comes around and some day - like J K Rowling - at least one of them might make it big and buy that overpriced mansion in the wrong part of town, we’ve been quietly offering for the last three years

‘I just think a bit of restraint is a good thing.’ I say wearily.
‘Like in Fifty Shades of Grey?’ Asks trainee F, with an unpleasant chuckle. God knows what he’s bought his on-off girlfriend but I hope the hardware store issue gift receipts….

‘He’s a miserable old sod.’ Says bloated mortgage man M, joining in my festive character assassination rather too gleefully. ‘He never wants to even put up a tree.’
‘People already dislike us,’ I tell him. ‘A cheap nativity scene made with children’s farmyard animals and some lights from Lidl isn’t going to persuade the public to show us any goodwill.’

The chorus of “Bah Humbug” couldn’t have been any more co-ordianted if that annoying choirmaster on the television had conducted it. Three staff members in unison decrying my miserly spirit. Perhaps I have been here too long - I’m still not sanctioning a Christmas jumper day, though.

‘Morning everyone, happy Christmas!’ Chirrups the board man, as he enters wearing - predictably - some gaudy knitwear, flashing like an epileptic lighthouse.
‘He doesn’t do Christmas.’ Says S, with a petulant pout - quite an endearing one.
‘He won’t want these then.’ Says the board man, waving a tub of Quality Street totally inappropriate for the majority of homes on my register.

‘Is that the best he can do?’ I ask sourly, after the board man has left having spotted the traffic warden heading towards his double-parked van. ‘These are lovely,’ counters M, as he stuffs another chocolate into his fat face. The board man hasn’t even started his motor and M has managed to leave a trail of three sweet wrappers across the filing cabinet top. It’s not his fault though - it’s genetic….

‘It’s the thought that counts.’ Answers S, shaking her head at me.
‘And I’m thinking we pay him several thousand quid a year to put for sale and lettings boards up, and all he can get is a £4.99 tub of tat with about as much originality as filling station flowers.’ I reply.
‘I wish someone would buy me flowers.’ Says B wistfully. If you knew them long enough to learn their name they might, I think sarcastically, assuming they could get the time off school…

‘But I love this time of year.’ Counters S, as I slip into rant mode about false bonhomie and overspending on jacked-up credit cards. Not sure when I turned into a Grinch-like curmudgeon - probably about the last time Jim Carrey made a decent movie. Then the bean counter boss rings.

‘Are we going to get any more contracts exchanged before Christmas?’ He wheedles. Don’t know what he means by we, the figure-fiddler is usually about as inclusive as a 1950’s golf club. The chances of getting any solicitors on the phone this side of the new year are slim to zero, at least one local firm is closing for over a week. I really should have paid more attention at school.

‘You are going to be short otherwise.’ Continues the frustrated accountant - he failed the charisma test. In the absence of a cheap box of supermarket sweets, I offer platitudes. He turns sour.

‘Any chance of the Harrison’s chain exchanging before shut down?’ I ask S, phone still rocking in its cradle.
‘More chance of an immaculate conception.’ She answers playfully.

Have a great holiday season and thank-you for reading.

See you in the New Year.