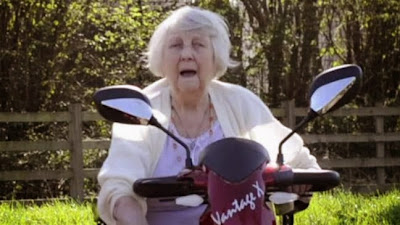 Back at another sheltered retirement home development, with that growing sense of foreboding I’ve been getting ever since I valued my first one, about twenty-five years ago. In those days the minimum entry age of fifty-five seemed an age away, and about right for giving up on life and playing Whist in the communal lounge until the undertaker came. Now I’m not so sure…..

‘You can’t park there.’ Croaks an elderly woman, sitting astride one of those bulky motorised wheelchair-come-quad bike things that force you off the pavement and clip your ankles in supermarkets. I swear most occupants aren’t disabled, just too fat and lazy to walk.

‘I’m visiting number forty-two.’ I tell the nosey crone, who in fairness looks wrinkled and wobbly enough to justify her Blue Badge, allowing parking outside my office where I’m not permitted to stop.

The hag’s eyes twinkle. ‘Marjorie’s flat?’ She enquires with a gummy smile. I consult my clipboard and confirm the identity of the elderly owner, who is now in her third month blocking a hospital bed. I’m meeting the son in five minutes, so I need to shake off this old woman with all day to spare.

‘I knew she wouldn’t be back.’ Says the old girl with an unsettling chuckle, before engaging some sort of drive mechanism and whining across the car park towards an open ground floor flat door.
I want to shout after the gloating woman, and tell her re-sales are really tricky on low-level units, but in truth it will be her beneficiaries who’ll have that problem.

‘Come on up, I’m on the fourth floor.’ Says a male voice, after I’ve buzzed the communal entrance doorbell. The door clicks and I grab it before the cut-off locks again. I’ve spent too many awkward minutes trying to re-establish contact with a hard-of-hearing occupant upstairs, when I’ve not tugged the door in time.

‘You here on business?’ Demand a disembodied voice, as I enter the gloomy foyer and get the first whiff of stewed cabbage that invariably inhabits the halls of these blocks. I see the house manager is in her little cubbyhole-come-office. There was a time when these places all had a live on-site warden to help the residents and to justify the sky-high management charges. Then the bean-counters took over.

I show the sour-faced woman my card and she begrudgingly nods acceptance, before adding curtly. ‘Don’t give them a stupid price. I know what you lot are like.’
I offer my well-practiced false smile and push the lift button. Nearly five minutes later the doors wheeze open. More bean-counter cost saving, I think, as I notice the cheap lift manufacturers logo and begin to wish I’d taken the stairs.

New build has often fetched a premium, but the prices elderly folk pay for these shrunken square footage flats has always disturbed me. During my first property crash I used to sell the second-hand, slightly soiled units, for about half what the parents had paid for them less than eighteen months before they went to the nursing home. Most of the blocks used to be called Something Court. Totally caught would have been more appropriate.

‘That you on the mantlepiece?’ I ask the late-middle aged son of Marjorie, as we try not to step on each others toes in the cramped flat. As usual, the furniture is way to big and dark for the living room/kitchen.

The man looks at the collection of faded photographs on the mock fireplace, wobbly-balanced above an electric fire.
‘Yes.’ He answers with a self-conscious grin.
‘Mid-seventies?’ I enquire, looking at the shot of him with wrinkle-free skin and a disastrous mullet hair cut, but thinking about a suitable price for his mother’s flat.
‘Afraid so.’ He answers with a sheepish grin and a sweep across his bald pate, where time and genetics have robbed him of his locks.

‘Do you know how much Mum paid for the flat?’ I ask gingerly. Sometimes they say, sometimes they don’t. Then I hit him with the price.

Fortunately, he couldn’t tear his hair out.

Download the ebooks while you still can - links on the right.
Posted by secret agent at 9:24 PM