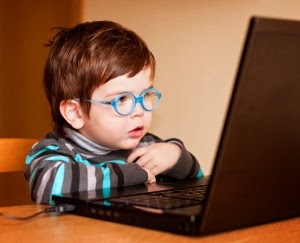 ‘Computer is down.’ Says trainee F by way of a greeting, as I return to the office.
‘Well I’m pretty fed-up too, after the tossers I’ve just seen.’ I tell him grumpily, but he doesn’t get the weak attempt at humour.

When I was in my estate agency infancy, so were computers. I’ve struggled to keep pace with the burgeoning technology, to the stage where I yearn for an earlier age. One where you got to know your mailing list by telephoning them, and still had the excitement of waiting for negatives to be developed, when you took a property photo. Now, computers are like some digital deity, imbued with a sense of super-intelligence much more than the sum of the parts - a bunch of soldered wires and micro-circuits with an overdeveloped sense of their own importance.

‘All the computers?’ I ask, dumping my equally old-fashioned briefcase on the floor and gesticulating round the office.
‘They’re all on the same server aren’t they?’ Replies F.
Probably.

‘I’ve rung the help desk.’ Says negotiator S gently. She knows I think that title is an enormous misnomer, at least she is after my last rant and the subsequent explanation of misnomer, minus the expletive.
‘And?’ I reply peevishly.
‘They are sending out an engineer. It’s a fault at our end.’

Of course it is. Each new bunch of bandits over the years who flog us the hardware and more deviously the tailor-made software, tend to stitch the company in to costly maintenance contracts and whenever operators find glitches in the system, or parameters not catered for in issue 1.0, there’s an exorbitant charge for updating to a new version just to fix their crap product in the first place. I could go on - for several versions.

‘What’s the matter with the intranet?’ Asks obese finance man M as he waddles out of his office, pained look on his chubby features.
‘It’s crashed.’ Replies F.
‘Our end or theirs?’ Says M.
‘Ours of course.’ I tell him sourly. He’s probably only notice because he can’t access his f***ing Facebook page. I refuse to go down that route, not least because you need to give your true name and age. You can find me on Twitter though - anonymously - @theagentsdiary….

‘Has anyone tried turning it off and back on again?’ Asks M, brow furrowed. He’s from a similar vintage to me, one that didn’t grow up with Nintendo 64s and Play Stations.
‘That only works on stand alone peripherals.’ Responds F.
I didn’t think he knew the meaning of the word, so I’m not about to challenge its accuracy. Although I’m pretty sure it is tech-speak for printers and scanners. Pretty sure.

‘In my day,’ I begin to a low collective groan. ‘We didn’t have any computers in the office.’
The phones are as quiet as the eerily blank flat-screens and we’re still waiting for the pre-pubescent engineer to arrive. He’s probably only available after school hours.

‘So how did you prepare sales details and upload photos on property portals?’ Quizzes F in bemusement.
‘We had one electronic typewriter and a secretary in  each office.’ I tell him, feeling like the ancient mariner - only with a less seaworthy boat.
‘Typewriter?’ Responds F depressingly.
‘Like a printer and a keyboard all-in-one, sweetie.’ Enlightens lettings lush B, with a lipsticky smile.
‘Old school, or what.’ States F rhetorically.

‘And,’ I continue warming to the theme. ‘We got to know the applicants personally, by ringing them on a regular basis. Not just pushing the send button on electronic mail outs.’
‘So how did you, like, keep track of them?’ Questions F.
‘An index card system, with hand-written names, numbers and requirements.’ I tell him primly.
‘Man, that’s insane.’ Says F. ‘You’d need to be on the phone all day long.’

‘You had to qualify the applicants properly.’ Contributes M, before adding. ‘And find out if they needed finance and insurance.’
‘So you could flog them PPI and endowment’s?’ Challenges S.
‘They were good products at the time.’ Mutters M unconvincingly. before waddling off.

‘This could be him.’ I say, as a kid in school uniform walks up to the window.
It wasn’t.

Now read more 'Agents Diary' tales. Granted, they are ebooks but I had help with the technology and conventional publishers only want to print named celebrities with big tits. I'm anonymous and....well you get the picture.
Download links on the right. All formats supported via free Amazon App.
Posted by secret agent at 7:52 PM