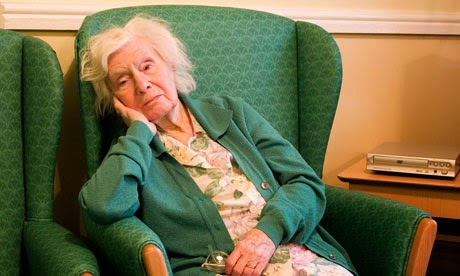 ‘Are the other residents friendly?’ Asks the pernickety daughter as she guides her elderly father along the first floor corridor of the retirement apartment block.
I’ve managed to get in the main door with the communal key and avoided the overbearing manager, who if past experience is anything to go by will try and hijack my buyer into looking at one of the many re-sales the management company - her employer - are trying to flog.

‘Oh they are a lovely bunch.’ I answer, trying to hurry the pair along the never-ending run of patterned carpet and closed sapele fire doors, with those spy holes. I expect a few ancient inmates - I mean owners - are squintily watching our progress along the interminable dark warren that resembles a budget hotel setting. No doubt if the old boy does move in he’ll be in great demand from the predominately female inhabitants. Rumour has it any reasonably able-bodied pensionable male can die with a wrinkly smile on their face, if they can last long enough and get a decent supply of Viagra.

‘What happened to the owner of this one?’ Asks the daughter as we reach the appointed door and I fumble with the keys. It’s not a great question to answer. The clue is in the name with Retirement Apartments, if they don’t get shipped out to a nursing home the occupants usually leave horizontally - on a gurney.

‘I think they went in to full time care.’ I say as vaguely as I can. It could be argued the embalmer constitutes fairly permanent full time care, but fortunately before I’m pressed further I get the door open and we move into the even darker entrance hall.

I swiftly hit the lights, but I can’t hide the musty smell and the hint of stale urine.  Always best to fit new carpets if you buy one of these places second hand. Hurriedly, as hurriedly as you can usher a man with two walking sticks and a heart condition, I bring the duo in to the living room/kitchen.
There is one window at the far end overlooking the car park and the kitchen is as dark as the hall, with just a wheezing extractor unit to pull the pong of piss from the air. I’m not a big fan either…

Window flung open as far as the restrictor will allow - jumpers can wreck the communal morale - I give the highlights of the room. The illusionary safety net of the orange emergency pull-cords that put you through to a call centre where English is a foreign language, and the waist high electrical sockets to stop rickety backs from popping out of alignment.

‘I’d like to know about the service charges.’ Presses the daughter as her father sinks into the one high-backed chair, left incongruously in the middle of the room. The beneficiaries had their pick of the furniture and jewellery and are just bitching about the asking price.

I give the woman the latest set of figures we’ve managed to prise from the managing agents. They want paying for each piece of reluctantly given information and would even charge for a phone call if they could gouge it from you.
‘It seems a lot once Dad’s paid for his electric and other costs.’ Replies the daughter accurately.
She’s not wrong, but then for years the major players who built these blocks owned the management companies as a subsidiary. Allegedly, it’s not so often the case now, but I still suspect there are mutual interest behind the scenes.

If any member of my family wanted to buy a retirement flat, I’d get our solicitor to take a good look at the lease and management costs and to ask about sinking funds and future major expenditure on maintenance projects. Better still I’d get them to hang on in their own home as long as possible. This pair are not blood relations though.

‘Is it good value?’ Asks the daughter as we stand back in the hall while her father tries out the internal bathroom. We can hear every slow dribbling drop of piss the old boy is expelling.