Until You Drop - Saturday 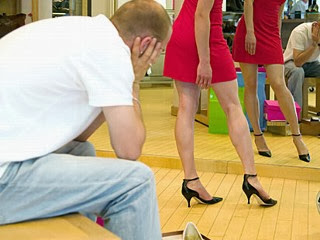 ‘What do you think?’ Asks my wife. It’s a question more loaded than the potato skins I was daydreaming about, before she emerged from the changing room. My stomach rumbles and my brain stumbles as I try to take in the first dress she has tried on.  Unhelpfully another question forms in place of an answer: Does her arse look big in that?

I knew as soon as the shopping trip for a Christmas party frock was suggested I was on a hiding to nothing. I’m all for equality of the sexes but there are some things a man just can’t do. Like childbirth, advising on women’s clothes - unless you’re a camp fashion designer - isn’t something a male should attempt.

‘I like it.’ I say unconvincingly. I’m usually better at flattery. After all I value people’s homes six days a week. Something you learn fairly swiftly in the property industry is very few people want the unvarnished truth, when it comes to their number one asset.

‘You’re just saying that because it’s the first one I’ve tried on.’ Says my wife, spinning, quite elegantly I think, on her shoeless feet and disappearing into the changing cubicle. Another browbeaten bloke is sitting opposite me in those chairs I imagined were only for dizzy pensioners waiting for an ambulance, or perverts trying to get a glimpse through the curtains. The man is clutching a mass of expensively branded shopping bags. He clearly started earlier than me.

‘What can you do?’ I say with a shrug.
‘Just pay the bill.’ Answers the man ruefully.
‘I’d happily do that,’ I fib a little. ‘But she wants my advice.’
‘Poison chalice’ Replies the man with the sort of certainty drawn from bitter experience.

When this unwise expedition was first mooted and after I’d hoped the weekend staff would ring to say they needed me in the office, I turned to Twitter for advice from fellow members. The perceived feminine wisdom boiled down to: don’t ask the price, don’t ogle other women in the changing area and don’t expect to get home in under four hours. The blokes said: go to the pub then come back with your credit card when she rings.

‘There are no prices in the window.’ I caution, as we stare in Karen Millen’s shop-front. Top-end agents do that trick with country homes. One’s where they haven’t a clue on value, or where they want to deter time-wasters and dreamers. It’s called POA – price on application. The marketing thrust is, if you have to ask the price you can’t afford it. Now I can just about stomach that for substantial bricks and mortar and a forty acre estate with servant’s quarters, but for half a yard of taffeta and a few sequins I’m wanting to know the downside before I step over the threshold.

‘What about this one?’ Questions my wife, with a slow spin. We’re in a department store now on a floor I’ve never felt the need to visit. It seems each designer outlet has rented a bit of square footage so you can pad from one overpriced range to another without replacing your high heels. I haven’t been so out of my depth since that brief, dunk-a-baby fad of throwing learners in the pool so survival instinct taught them how to swim – rapidly. It was pre- health and safety rules, obviously.

‘Well does it flatter me?’ Continues my wife, as I splutter back to the surface, another unwanted childhood memory banished until the next nightmare.
It makes her look a little bit pregnant I think and the hesitation does for me. She spins, a little more clunkily this time.
‘Well you needn’t say anything.’ She huffs and disappears inside the curtained inner sanctum.

‘Are you waiting for someone sir?’ Asks a frosty, mutton dressed as lamb, assistant at the next emporium. My wife is in the nearby cubicle. I can see her ankles through the cut-off door. I put my phone away, realising it might look as if I’ve been taking surreptitious video clips for ChubbyCalfs.com. I tell her my wife is trying on a dress – her ninth.

We bought the first one.

I can't do fashion tips but I can help you understand the property market. No need to leave the house, download the ebook on Amazon:

US Readers: http://amzn.to/vXpFJf
Posted by secret agent at 8:54 PM

I remember one shop I went to had leather armchairs and copies of GQ for the men to peruse whilst waiting. I was always quick to suggest a visit, and they also did nice clothes - everyone is a winner!