Rain On My Parade - Friday 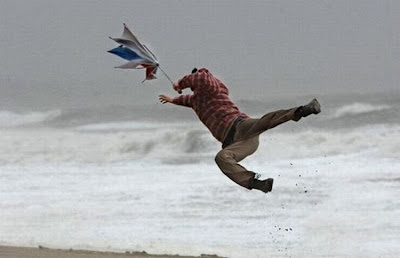 ‘They’ve got to be having a laugh.’ Announces assistant manager T dryly, as I hurry in to the office damply. My umbrella wasn’t in the car boot where I left it, but I can see it now, all primary coloured, golfy, sponsory and fashion-free, as it sits in the corner mocking me.
‘Who used my umbrella?’ I demand testily, but I know even as I say it. F the trainee with the single-figure IQ, is looking the colour of the rain-protecting freebie even as I scan the appointments diary and realise he was the last one to use my company car.

‘You used it to walk back from the car park earlier didn’t you?’ I state rhetorically.
F blushes a deeper shade of crimson, then nods sheepishly.
‘Why didn’t you put it back?’ I demands, vaguely aware I’ve gone off topic, but too soggy to see sense.
‘Uh, it was raining.’ Responds F.
No shit, Sherlock? Seems like a viable option, but if he cries again it will mean more paperwork and the involvement of Human Resources – the only sustainable boom in housing, or any other industry, from my experience.

‘To be fair,’ soothes S my negotiator, a woman who could pacify for a living – only without the giant dummies and over-sized nappies, that would just be weird. ‘How would he have got back from the car himself without being soaked.’
Sometimes you don’t need logic, even from someone as uplifting as S.
‘You need two umbrellas,’ slurs lettings lush from her cluttered desk. She sounds like she’s been daytime drinking again. ‘One to leave in the office and one to leave in the car.’
Everyone ponders that one for a while. After multiple furrowed brows, F begins to raise his hand.
‘Don’t.’ I tell him, as gently as I can.  After the last trip to the dentist I’ve got to cut down on the teeth gnashing.

‘I’m on a corporate jolly next week,’ Says rotund finance-fiddler M as he waddles across the office towards the kitchen. ‘I could see if I might snaffle a few of their golfing brollies.’
Who is it?’ I ask, still thinking I should be addressing something other than clunky rain protection, which inevitably inverts catastrophically the moment a breeze wafts above 1 on the Beaufort scale.
M tells me the lender’s name and I bristle.
‘There’s no way I’m advertising that bunch of shitesters,’ I snarl back, still remembering the mortgage offer they withdrew at the eleventh hour, on a chain of three sales. ‘I’d rather drown.’
‘Suit yourself.’ Says M unperturbed. ‘You won’t be wanting any of their goody bags with the free pens and pads either.’
‘No I won’t.’ I fire back primly. To be honest I’ve a cupboard full at home and now the boys are at university….

Finally it clicks.
‘Who is having a laugh?’ I ask T, turning to face him and feeling the crotch of my trousers sticking damply as I move. My shoes are soaked; the leather soles are slipperier than a politician on Question Time and my jacket shoulders appear to be gently steaming in the office warmth.
But my mind is already running through an Interpol-like suspects list: buyers pulling out, vendors wanting more money as the neighbour has just gone on the market for £20k more than they’ve agree a sale for, bad employers references, a 100% mortgage retention pending re-building works – the list is endless.
‘The buyers of flat 7 want a £15,000 reduction or they are pulling out.’ Says T wearily.
S shakes her head and her breasts go back and forth doing that well-upholstered Newton’s cradle thing again.
‘Remind me.’ I ask T witheringly. ‘Is this the same couple who pleaded with us to take it off the market and not show anyone else round?’ T nods. ‘And said it was their dream home and promised they wouldn’t let us down, that their word was their bond?’
‘That’ll be them.’ Confirms T.
‘Bastards.’

‘Any luck?’ I ask T after he’s spent the rest of the afternoon, trying to save the dying sale.
‘Owner won’t drop a penny,’ answers T, face drawn with fatigue. ‘Say they might take the flat off the market now.’
It never rains but it pours.

Keep your property powder dry and download the 'Agents Diary - Year In The Life' ebook on Amazon. You'll be laughing.

US Readers: http://amzn.to/vXpFJf
Posted by secret agent at 7:39 AM