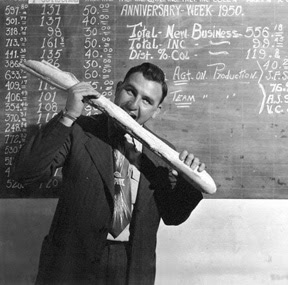 ‘Could you do a viewing at lunchtime?’ Asks negotiator S as I come back in the office stomach already rumbling. The bran and suspect dried fruit offering I had at breakfast, in solidarity with my wife’s family diet, has proved an inadequate substitute for a full English.

I move towards the viewing book, before spotting S’s reproachful look. I shouldn’t be cherry-picking the viewings, not a great example to the staff. Treat them as you’d like to be treated yourself I think, as another unhelpful image of S treating me, as I’d like to be indulged flits through my mind.

The silence has gone on too long and as I’ve often told S, as well as the other team members, silence is a powerful tool in selling. Make your pitch then shut up. People always feel compelled to fill a conversational void. I’m paused halfway towards my target and she’s waiting, knowing, looking. Looking pretty good, as it happens. I crumble.

‘No problem. Where is it?’
She tells me, with the hint of a triumphal smile.
‘You’re kidding?’ I grumble, stepping to the diary and confirming the worst with my own eyes. It’s a grotty converted flat in a shabby part of town, currently let to a couple of scruffy students – although I suspect there are more than two occupants most nights. It wouldn’t be the first time someone had sub-let the couch and the carpet. The landlord wants to sell when the tenancy expires, but the current occupiers have no interest in helping him - or us.

‘Have you told the tenants?’ I say cursing this wretchedly misplaced socialist attitude towards my colleagues. A dictatorship works best in sales. I should have ordered someone else over the parapet and stayed at the back like a First World War General, sipping red wine and screwing the locals.

‘They are going to be out so it’s ok to use the keys.’ Says S a trifle smugly. I scan the other appointments, short of re-arranging the diary in an obvious ploy to avoid the smelly socks and unwashed dishes I need to go. I take a sulky walk to the key-cupboard grab, a set of the details and the viewers contact details. I won’t need the rape alarm, I think absurdly, seeing the spare unit alongside the other dozens of sets of keys, but I might need the flea-spray. I’m already starting to itch.

‘Oh it’s a bit dark and dingy.’ Says the girlfriend of the slightly effeminate, posh-vowel city boy alongside her. He has that weak-chinned overfed and overeducated look of someone used to privilege and spending his parents’ money. If he works for one of Daddy’s friends, as he’s unemployable anywhere else, I suspect they’re not paying enough if this dump is all he can afford for his weekend shag-pad.

‘The communal areas are due a spruce-up.’ I tell the woman with a smile I hope isn’t as sickly on my face as it feels looking out. They’ve been due a redecoration for at least three years but the residents are in dispute with the freeholder. He wants to appoint his own building company to do the work, then doubtless stiff the sinking fund with an over-inflated invoice. No change there then.

Dodging a couple of grubby prams, both empty this time, and a rusty bicycle, I reach the landing just as the light-timer pops off and we’re plunged into semi-darkness. Hurriedly I stab the button and the greasy landing light wheezes back to a low-energy, low wattage puddle – it’s certainly not a pool – of light. My stomach rumbles like a Tube Train passing under the foundations.

I tap the door than work the flimsy lock.
‘I’m really not sure about this one already.’ Trills the girlfriend with the double-barrelled surname. God, if he ever does marry her they’ll need a whole page in the phone book to themselves.
‘It’s nicer inside.’ I say then remembering how quick people are to sue now with all the no-win-no-fee shark solicitors around, I add. ‘Or will be once you’ve decorated to your own taste.’

‘Did they like it?’ Asks S on my return.

-----
View and buy for the cost of a cuppa the property ebook, available here:

US Readers: http://amzn.to/vXpFJf
Posted by secret agent at 9:31 PM