Hanging On The Telephone - Wednesday 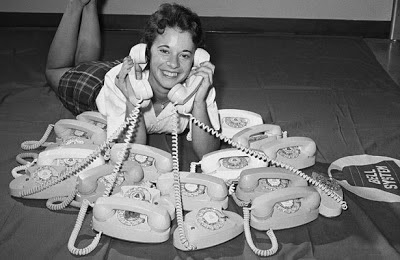 The phones are jangling insistently as I enter the office after another fruitless appointment. Negotiator S is looking harassed, locked into what sounds like a difficult call. B the letting lush is over by the printer ignoring the residential line again. The ringing in my ears gets louder.

Coat still on, I grab a handset and punch the flashing light. Corporate greeting parroted I find out why we are so sought after.
‘You have a two bedroom flat advertised in the paper for £95,000,’ says an uncultured voice. ‘Can we view it?’

My mind goes blank. Have I finally cracked and regressed back through some sort of mental time warp to the nineties, when I still thought I had career prospects and good hair? The other lines still chime and B still fiddles with the printer paper tray. Where the hell is everyone else?

‘Can you grab one of our lines?’ I ask B fractiously, after I’ve realised what has happened and dumped the caller to a rarely used swear word in response.
‘I’m trying to get a contract sorted.’ Snaps B, shoving the offending paper tray back into the machine with an expensive grating sound. If the engineer comes out again this month he’ll need his own coffee mug.

I take one of the ringing lines as S finally finishes her call and grabs the other one, look of unflattering fatigue on her, as yet, unlined face.
‘It’s not £95,000 madam,’ I say apologetically. ‘The paper have missed a number two out.’
As I say it, M our obese mortgage man waddles back from the direction of the gents’ toilet, my newspaper under his arm. He’s clearly not missed a number two out, I think angrily, as a vision of having to eat my sandwich in a rush while scanning the headlines M’s been perusing before washing his hands, flashes in my head like strobe lighting.

‘So what are you saying?’ Quizzes the lady caller curtly. ‘Is it £95,200 then?’
Can people really be that stupid? I think, before answering the rhetorical thought in the affirmative.
‘I’m sorry it should have read £295,00 madam.’ I say, bracing myself for the vitriol. Quite inventive as it happens, but with a more commonly used expletive this time.

‘You lot are all the same,’ rants the woman, certainly no longer a lady. ‘It’s just a con to get us to call.’ She couldn’t be further from the truth, but I’ve no time to explain as another two lines have just started trilling and I like to answer within three rings. Any quicker and it sounds desperate, much longer and you appear uncaring and understaffed.

S and I simultaneously explain the misprint to another pair of dreamers just as trainee F wanders in, snout in a McDonald’s takeaway bag. I point to a third line just illuminating - which is more than he’s ever managed to be. He nods and takes another bite from his burger. I physically feel an artery constricting.

‘Where on earth is everyone?’ I grumble when the activity has finally quelled.
‘Lunch.’ Says F wiping a dollop of ketchup from his chin and only succeeding in smearing it across his face like some lipstick-smudged tart after a busy night by the wheelie-bins – or B in lettings.

‘So is this, like, a new instruction?’ Asks F when I find a copy of the free paper and angrily highlight the printer’s error.
Punching him is no longer a viable option, although God knows it’s tempting. I make a mental note to bring his lack of awareness up at our monthly one-to-one, if I remember…

‘They can’t really expect us to be selling a two bed for that money in that location.’ Says S wearily as assistant manager T walks back in carrying a brace of expensive-looking shopping bags.
‘Alright?’ He asks warily, the atmosphere frostier than a mortuary fridge.
Not really.

‘Bloody idiots.’ Pronounces T, once I’ve informed him why the phones will be uncommonly busy for the next three days.
‘The paper or the punters?’ Asks S walking towards the kitchen slowly.
‘Both.’ Answers T before adding. ‘Does anyone want to see my new shirts?’

-----
Engaging property advice with the e-book, take a free look on Amazon here:

Well, at least you know how to drum up some more business now - drop the asking prices & reset the market to 1999 or thereabouts ;-)

'Vendors'?
A. There are loads of people trying to sell but they are not sellers.
B. I love it the way you guys call them vendors. Gosh, you're all soooo clever

Re. Vendors - Dictionary definition seems to fit and every industry has to have some buzzword bingo - not sure what your point is?

Why don't they just say Sellers? Because tbey want to appear smart and ooer technical

Vendre is French for 'to sell'. It's not a biggie, Jonathan.