God Save The Queen - Sunday 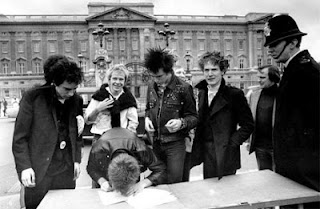 ‘So no real reason then.’ I state to my wife as she fusses over which blouse to wear and I vacillate over unlikely shorts this time of year, or trousers.
‘It’s just nice to do.’ She replies, tilting her head in the mirror then turning towards me. God I haven’t a clue which one, I think as she sees the look and decides not to ask. She goes back to the wardrobe as I tug the shorts off. They seem a bit snugger round the waist since the last time the sun came out.

It’s another ill-fated, much rain-delayed autumn barbecue, which will still probably end up with soggy attendees huddling under a leaky gazebo, a couple of kids heading for casualty after bouncing off the trampoline at unexpected angles and a beer-fuelled argument about property prices. I don’t really want to go as I could happily live without seeing the majority of people coming, for at least another year – probably longer. But my wife and her cronies still arrange the twelve-monthly gathering of friends, neighbours and even ex-neighbours, who have the sort of lifelong membership usually reserved for Wimbledon winners and those who make double centuries at venerable cricket grounds. I’m not bowled over by the prospect.

‘Most people wait for a jubilee or a dead monarch to have these cheesy garden parties.’ I grumble, as I notice the jeans are a bit tight too and that’s before a carnivorous chow-down on burnt burgers and incinerated ribs with less meat on them than Kate Moss. My wife glances at me with what eighties warblers ABC definitely wouldn’t call The Look Of Love, although no doubt someone will be playing them, along with Simply Red and the f***ing Lighthouse Family before I’m sufficiently pissed to care. My Clash, Sex Pistols and The Damned compilation was swiftly ousted by a woman who loved Michaels Jackson a couple of years ago. Her husband looked like an albino chimp appropriately enough, and it was after I inadvertently called him Bubbles that the first argument started.
‘Just be pleasant’ Coaches my wife as I decide against any shirt with even a hint of Hawaii about it and plump for something loose and plain – the best way to get an easy screw according to the serial shagger I ended up drinking with last year.

‘Hi great to see you.’ Gushes a pasty-faced man as we enter the chosen garden clouds gathering, and I try to hide the cheap lager I brought with me in the pile on a wobbly trestle table.
‘You too mate.’ I fib, wincing at the unconvincing term. He must know, as I do whenever the disingenuous word is used, that I can’t remember his name or what he does. The man has worn horribly and looks as grey and washed out as a pair of old underpants. This sort of barefaced deception would get me prosecuted under the Consumer Protection Rules if I applied the lie to a worn out three-bed semi detached house presented, immaculately.

My wife seems to be circulating effortlessly while I get stuck with bores bigger than North Sea oil rigs can muster and a new couple who are wetter than the weather is about to get.
‘So you’re the estate agent?’ States the scrawny wife as her underfed husband with the limp handshake looks on attentively. He looks in need of a good meal but as she’s already told me she’s decided they should both be vegetarians, he’ll get no sympathy - or sausages - from me.
‘We think we paid a good price for our house.’ Continues the woman in what sounds like a challenge. They didn’t buy it from me so there’s no duty of care. I mention a similar one we’ll be marketing in a week or two at less money and leave.

‘Christ these people have aged.’ I whisper to my wife when I go for a top-up - of someone else’s beer.
‘We all have.’ She replies tartly.
‘Which family have those bloody cats?’ I ask, glancing at a portly man carrying more timber than a lumberjack’s trailer, wearing a suspiciously hair-covered fleece
‘You won’t be crapping on their lawn.’ She tells me decisively.