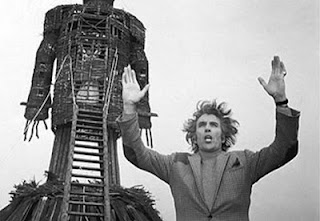 ‘That’s the third for sale board that has gone missing.’ Says trainee F, look of puzzlement on his face. God why didn’t I see that when I interviewed him? He was the best of a bad bunch and if you don’t set a minimum standard for entry in to the industry I guess you keep getting in-bred public school boys not smart enough to be surveyors and solicitors - or chancers with the gift of the gab who didn’t pay attention at state school…

‘The time of year isn’t it.’ States assistant manager T. It’s not nearly enough to illuminate F. His face creases into the sort of frown I use for fractions and algebra. Some people dream of being naked in a public place, I just have nightmares about being exposed anywhere without my calculator.

‘What because the clocks have gone back?’ Questions F hesitantly. Oh for the days when you could sack someone with just a letter and a bin bag for belongings. I can’t face another session with the lesbians in Human Resources and the chairwoman of the industrial tribunal had a distinct dislike of estate agents. In fact all three on the panel did, even the token guy who supposedly had some experience of running his own business.

‘Never heard of Guy Fawkes?’ Asks lettings lush B, voice thick with sarcasm.
‘I don’t watch gardening programmes.’ Replies F in seeming sincerity. A stunned silence engulfs the office until a phone rings.
‘Fireworks night, you plonker.’ Says T as B answers her line and begins a fractious conversation with a tenant too lazy to turn the stopcock off herself, despite the woman downstairs needing an umbrella in her living room.

‘They steal the boards to put on bonfires.’ I tell F wondering, not for the first time, why I bother. If it takes months in a laboratory and half a ton of bananas to teach a chimp to push the right button, I’m not going to train F to function properly without another five years and my own greengrocers.

‘You see them in back gardens on waste ground, even at organised displays.’ Adds T. ‘Some they’ve had since they moved because the agents forgot to collect, some they keep out of spite because they hate the agent they bought through and others they nick in the night when they’re short of firewood.’

‘Loads of people dislike us don’t they?’ States F pensively.
‘It’s because the home moving process is stressful and adversarial.’ I tell F, wondering how much of a hit the office profit and loss account will take when the new board order comes through in a few weeks time.
‘The best thing to do,’ advises T. ‘is to hate them right back. Most of them wouldn’t put us out if they saw us burning. Make the feeling mutual and it’ll help you get through the day.’

I never knew T was becoming such a protégée. And I thought he didn’t care that much.

‘You do fireworks at home?’ Asks negotiator S looking me in the eye as I strive to reciprocate. I’m hoping her bra has some sort of super-strength carbon fibre inserts because there’s a strong gravitational pull going on.
‘Not since both boys went to University.’ I tell her wistfully, feeling old all of a sudden. There was a time when I was the youngest, sharpest, best salesman in every firm I worked for. That flame has long since guttered.

‘Do you remember those jumping jacks that leapt round your ankles and those hover fireworks that came at you at head height?’ I ask big mortgage man M. He shakes his vast jowls and waddles to the kitchen. ‘Before my time mate.’ It wasn’t - and he isn’t my mate. I turn to B who has just finished arranging the landlord’s plumber.
‘Don’t look at me either.’ She growls menacingly, as a line about old bangers spins wildly in my head like an ill-attached Catherine wheel.

‘Health and safety wouldn’t allow any of those munitions now.’ I say to the ether, a man out of time.

Rest of the day a bit of a damp squib too.