Weather With You - Sunday 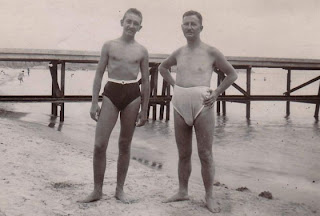 ‘Don’t make comments about people so loudly.’ My wife chides as the grey-haired man with the single plait walks by in too-tight Speedos and enough gold jewellery to fund a third-world coup.
‘He’s old enough to know better.’ I whisper, thinking you can’t Blog loud enough. Not nearly loud enough.
‘And now it’s the ugly sisters.’ I tell her, comment as involuntary as a nervous twitch, as two gruesome women in their thirties, with matching stomachs and spectacles, wobble towards the all-day buffet.

‘You are so rude.’ Pronounces my wife disapprovingly. What she seems to forget is I spend 48 weeks of the year being polite to oddball members of the public. In sales you are acting a part. It’s nice not to be a thespian occasionally I think, as right on cue the lesbian couple stroll past. Now I’m all for equality, some of my best customers have been gay, but I’m still bristling at the trousers only dinner rule, for men. Last night as I sweated in heavy jeans I only brought for the flight, the crop-haired masculine half of the pairing - the one who wears the strap-on I’m guessing - bounced in to the restaurant wearing grotesque shorts and nobody objected – other than me.

‘This is a people watching paradise.’ I tell her as the two women take the sun beds they’ve had reserved with towels since a pre-dawn sortie, despite it being early afternoon.
‘You might actually want to meet a few people, not just critique them.’ Sighs the missus, pushing the page-turner on her Kindle and tutting loudly. I don’t. I’m luxuriating in not having to talk to new people. Not having to flatter them on personality, price and property. Not having to explain what I do for a living. It’s far more fun to observe.

‘German.’ I hiss, as an old leathery-faced man bent double by his belly, shuffles past clutching a beer, incongruously wearing a £150 pair of Nike running shoes, presumably to help him get to the free bar faster. All-inclusive is proving to be a mistake, as even I have broken a cardinal rule and started drinking in the daytime. You can tell from what’s on their plate the sort of personality traits individuals have. Narcissistic, control-freak types hold plates bearing a few frugal fruits, and have the body shape to match. Greedy, weak-willed characters can’t help piling the food so high it totters as they waddle to their table. I just get pissed.

‘Check the t-shirt out.’ I tell my wife and she raises her eyes reluctantly. A woman with a lithe-figure but certainly not English as a first language, is wearing a capped-sleeve number with the legend Make Love Baby picked out in diamante.
‘Should I tell her?’ I ask mischievously.
‘Don’t even think about it.’
‘There’s a whole book, right here right now.’ I announce incredulously, but she just clicks to another page.

Then some arsehole’s phone rings loudly and I growl in anger. I’ve tried not to think of work for five days. I’ve studiously avoided the free Wi-Fi area by reception where saddos with no life and a handful of ginger-haired people who should have booked the Scandinavian cruise, gather to check their messages and avoid the sun.

‘Tell them I want the contract exchanged by close of business or the deal is off.’ Barks the man into his BlackBerry to some far-off subordinate, possibly his estate agent. My heart sinks faster than the bloater who just attempted to mount an airbed from the poolside and bounced straight off.

Until now it had been going swimmingly.