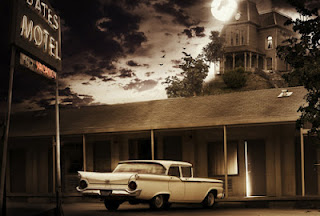 ‘How’s the room?’ Asks my wife cautiously, over a crackling mobile connection – surely nobody uses a hotel phone any longer?
‘It’s alright.’ I say unconvincingly, before adding. ‘Bit dated.’
‘Character then.’
‘I’m not trying to sell it.’ I snap back ungraciously. I don’t want to be here, she knows I don’t. Another day of force-fed figures and obscure guest speakers trying to flog over-priced product, followed by heat and eat sub-standard catering food and a night in a pricey bar with a bunch of half-cut property people. Unappetising.

‘Better than one of those motorway junction identikit boxes though.’ Coaxes my wife gamely.
‘If you mean crooked stairs, creaky floors and an en-suite in one corner made of chipboard, then possibly.’ I concede. I didn’t used to be this grumpy but time and dealing with the public will eventually leech vigour from the most optimistic of characters, and I was pretty pessimistic to start with.

‘Did you learn anything today though?’ Presses my missus doggedly.
‘Not to drink too much stewed coffee.’ I bat back, as my stomach cramps again and I look towards the claustrophobic facilities and wonder if the asthmatic extractor fan can cope with any more demand. The wretched thing will doubtless wheeze for thirty minutes in the night after any stumbling visits occasioned by the bladder alarm.

‘What’s the food like?’ Asks my wife as we run out of things to say to each other.
It’s bland, cheaply sourced and eaten with the sort of dinner guests you’d only inflict on someone you seriously disliked, but I can’t tell her that. I already sense she’s losing interest. So I ask about the boys, about her day, about anything other than here and now.

‘Do you know there’s actually a Corby Trouser press on the wall?’ I announce to a long silence. Momentarily I think I’ve lost the phone signal but she’s just pondering an appropriated answer.
‘Do your suit trousers need pressing?’ She finally asks.
They are currently hung over a radiator that only does full on, in the overheated room. One of those little bastard long-life milk sticks exploded on me as I tried to make a cup of tea, with the midget-sized kettle with more fur inside than a sickly cat. I just know the strides are going to smell bad come the morning – like their owner.

‘Are you going down to have a drink with the others later then?’ Probes my better half, as I sense she’s trying to wind the conversation up. Eastenders must be on BBC shortly.
‘The trouble is I don’t really like mixing with estate agents.’ I say, realising how absurd it sounds even before I’ve finished the sentence
‘Just have a couple.’ She suggests. ‘It might help you sleep.’
Sleeping well is something that has eluded me for months, if not years now. I’m just going to be staring at a different digital clock later, then attempting to creep across the creaking floorboards trying not to think too hard. Once the brain engages and starts running sales figures you’ll be wide awake until fifteen minutes before the alarm goes off.

Phone call over. Loneliness engulfing me like a wave. I decide to face the beer and bullshit downstairs. The trousers are still a little damp and there’s an unfortunately placed white stain I haven’t quite shifted, but I’m past caring. I glance at the instructions, in the event of fire, on the back of my room door as I prepare to leave. I can’t make out the easiest route to the exit. Presciently, a previous guest has managed to break the glass in the frame though.

In case of emergency.

Those who can sell, those who can't train. Get the course notes here.

oh thanks vm- three belly laughs from that one. I love little below the belt humour....