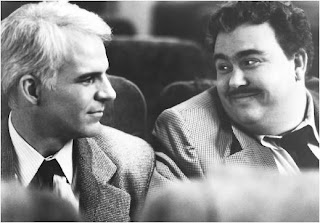 ‘Evening.’ Says the tubby man in too-short trousers and a badly creased shirt, as we meet awkwardly at the hotel lift. He smells of desperation and cheap aftershave. I’m thinking travelling salesman, with a territory spanning several counties. He’ll be wanting someone to talk to. I grunt a reply back, one designed not to encourage further discussion. No chance.

‘You with the convention?’ Continues the man with a waft of garlic breath that can’t help shift too may shower curtain rings, or whatever pointless product he’s vending from the back of his saggy-seated Vauxhall. Suddenly I’m Steve Martin in Trains Planes and Automobiles and I’m wondering if John Candy has been reincarnated as a poorly dressed Brummie. It’s no longer funny.

I tell him no, as we step into the creaky-cabled lift and I regret not taking the stairs. It would be just my luck to get stuck in the car waiting for a service engineer for a couple of hours while this man sapped what little will to live I have left out of me, dull story, by trapped storey.

Needless to say this sort of man hasn’t survived being blanked by his interlocutor. He’s clearly studied the welcome board at reception.
‘Must be with the estate agents then.’ He guesses correctly and I tense for the vitriol, but he surprises me by saying. ‘I’ve always fancied being in that industry.’ I’m supposed to ask what he does at this juncture, and his piggy eyes look at me expectantly. He’s disappointed. The lift starts to descend, slowly.

‘What sort of qualifications do you need?’ Presses the man as my stomach lurches in tandem with the movement. The manufacturer of the cramped car seems to be long since defunct and I’m guessing parts aren’t readily available. The man is looking at me expectantly and I’m tempted to list a line of A* grades and a degree in something worthwhile, but who am I kidding. I tell him and he whistles, either that or a frayed cable has snagged somewhere.

‘Nothing at all?’ He quizzes, head on one side, as we finally make the ground floor and the doors open to a buzz of conversation from the bar.
‘Just the gift of the gab.’ I reply, as I try to leave graciously.
‘So I’m kind of over-qualified.’ He pronounces with a throaty chuckle, before asking. ‘Do you fancy a drink so we could continue our chat?’

‘What you smiling at?’ Asks my short of stature rival manager H as I approach the bar alone.
‘Just confirmed another stereotype about the industry.’ I tell the poison dwarf, as I join him and half a dozen other agents hogging the bar.
‘It’s us against the world.’ Says H ordering himself another beer and failing to get me one. You can see why his office makes so much money. I finally catch the harassed Eastern European barman and get my order across just as the woman back from maternity leave slopes into the room. She looks like she’s about to cry again, so I cough for a white wine spritzer and wonder if I could register as a charity and save some tax.

‘I’m really missing my little girl.’ Sniffs the mother morosely as H starts telling a risqué story about a furnished property and one of his conquests. I want to interject with a quip about a stepladder but my companion is now telling me about missed first mumblings and feeding times. I just hope her breasts don’t start lactating.

‘And I can’t eat the cooked breakfast in the morning.’ Continues the woman who before she gave birth was a thrusting, glass-ceiling smasher with high heels and an attitude. She’s now a deranged hormonal mess with issues over babies and bacon.
‘This is all so pointless.’ She continues as I begin to wish I hadn’t blanked the fat shower curtain man. ‘They’re just covering corporate arses with courses like this.’

She’s right, I think, knowing with some comfort the bean counter boss wants her out of the company now she’s no longer anything other than reproductive.
I buy another round and we discuss Continued Professional Development and a replacement acronym.

Really good one overall - made me laugh anyway. Ending a bit weak - could be worth re-thinking.

Thanks Mr SA - but why do you guys need Continued Professional Development if there are no qualifications required in the first place?

To remain in the 'professional' associations trying to raise standards on a sloping playing field, Olive.
S.A.