Key To Another Door - Tuesday 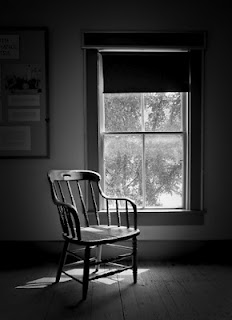 ‘Don’t you get spooked by dead people’s homes?’ Asks dopey trainee F nervously, as we pull up outside a ramshackle semi-detached house with the look of a decade or two’s neglect clinging to the elevation. I have the keys nestling in my pocket and the covering letter from the probate department of a local solicitor, is in my briefcase. It gives me a nice warm feeling.

‘Death, debt and divorce.’ I remind F as we open a rusting iron gate to a groaning accompaniment. ‘I’ve told you, they are the estate agent’s best friend no matter how the economy is doing.’
‘Yeh but it’s a bit…’ Begins F, tailing off as we dodge round a wild looking buddleia that’s trying to reclaim the crumbling path.
‘A bit what?’ I snap, as a thorny runner from something low-lying snags my trousers and I stoop to unpick it warily. I can’t afford to lose another suit to wear and tear.
‘A bit like grave robbing?’ Ventures F uncertainly.

I tell F curtly that we are providing a service, as I fumble with the tarnished brass keys and try to find the right one for the peeling front door. Remind him, with both debt and divorce we are putting people out of their misery and that with death it’s already been done. He doesn’t look convinced.

‘The deceased don’t grumble about the price and fee.’ I tell F sagely as I finally find the right key and the lock turns with a throaty rasp reminiscent of a death rattle. Bit creepy.
‘Yes but the beneficiaries still do.’ Replies F with unusual accuracy. Perhaps he is learning something.

The door gives after a couple of shoves, but stops after a foot or so as I encounter a few months worth of junk mail. At least I hope I do. I wouldn’t be the first estate agent to find a dead owner. A colleague bustled in a few years ago, viewer on their heels, to find a note on the stairs warning them not to go to the bedroom and to call the police. The man hoping to view the home grumbled that his time had been wasted even as the ambulance crew shook their heads and prepared the body bag.

‘Smells stale in here.’ Says F unnecessarily as I kick the free papers, take away menus and final demands to one side and we enter the hall. A locked house starts to feel musty after a week on holiday, if a stiff has been swinging from the loft hatch for a month or so, the stench will linger for months no matter how many times you try to gloss over it…

‘People like to know what happened to the owner before they buy don’t they?’ States F semi-rhetorically, as I feel a cobweb cling to my face while we move into the kitchen. ‘Best to keep the detail to a minimum.’ I advice F, adding. ‘Act dumb.’ He looks a little hurt, but he’ll get used to it.

A stack of unwashed plates is cultivating some sort of mushroom-style culture, as a tap drips mournfully behind.
‘I wonder what his last meal was?’ Questions F as he peers at the detritus. Probably something pureed I think glumly, as I glance down the jungle-like back garden and wonder who we’ll get to clear the shrubs.
In the cramped sitting room the remains of a real fire sits coldly in the grate. Ashes to ashes. The room is dark, with the threadbare curtains pulled against the daylight.
‘We’re going to need someone in to clear this lot.’ I say to F. ‘Not a lot of value here. Might have to pay to get it taken away.’
‘That’s wrong isn’t it?’ Says F morosely. ‘You live all your life and your stuff just ends up in the council tip.’

I glance round the room and spot the spaces where ornaments, a clock or two and some photographs must have sat, judging by the dust patterns. ‘Relatives have been in and taken all they want.’ I tell F as I open my brief case.

The second professional to measure-up recently.

Get the alive and kicking property ebook it's dead good..

Wow..really nice article. I think you done great work. it will help me a lot.Thank you for sharing such a nice information.

If things carry on like this, pretty soon the only people selling homes will be dead people and you'll just be acting on behalf of executors with lots of old, unoccupied and musty houses to try and push.