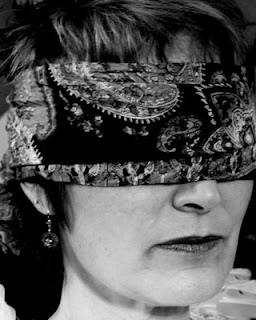 ‘Before you begin I’m not selling on the cheap.’ Announces the frosty woman who opens the door of a mock Georgian semi-detached house on a late seventies development, that has seen better days. It’s not the best of starts and the opposition estate agent’s board wedged down the side alley gives a big clue as to her – not unique – lack of love for the industry. But sometimes it’s better to be second or third in, when reality has finally started to dawn.

I hand her my card and we do the introductions. She’s standoffish and I sense the hostility even before the yappy dog tries to bite my ankles.
‘He’s just being friendly.’ Announces the woman as the little hairball paws and nips at my suit trouser leg and I have to make a superhuman effort not to kick the bitch half way up the hall.

‘So tell me how the marketing has been going?’ I open once we’ve done a quick tour of the house; flowery décor, kitchen showing its age - like the owner – and sanitary ware in need of updating. We’re now in the lounge/diner and I note the wood flooring is lifting and there’s an ominous looking gap between skirting and parquet. The area is a good one still, but the development has been known to suffer subsidence, as the footings weren’t deep enough originally. I suspect there’s some movement although I’m guessing it won’t be acknowledged, on the walls or on the price.

‘I’ve tried three agents over the last eighteen months.’ Says the woman sourly. ‘All useless.’ I know who they are, as I’ve done my homework and she’s two-thirds right, but then she’s also been trying to get a good thirty grand more than the house is worth. And that’s before a surveyor spots the crooked doors and floors and asks for a structural engineer’s report. I’m not sure I even want this house on my books. Some homes and some owners are more trouble than they’re worth.

‘How do you feel the other agents have been going wrong?’ I probe, looking for ammunition.
‘They didn’t advertise it properly and then they brought entirely the wrong type of people round.’ She replies, with the certainty only a myopic vendor can muster. I briefly wonder how she’d react to a newly rich lottery winner with no manners, no taste, but a desire to live in a dated semi with crooked floors and rotting window frames and happy to pay over the odds. She’d take the money.

‘What are you looking for in an agent?’ I ask, using a favourite question for disgruntled owners who have worked their way through the cheap operators and should be ready to pay a fair fee.
‘Well you’re all the same.’ She pronounces coldly as the dog growls in confirmation and bares her yellowing teeth at me. We’re not: any more than builders, painters or prostitutes.
‘Just want your fee and me to sell for a giveaway price.’ Continues the woman, as I realise why her husband left her for a younger model and a home that didn’t sag, too.

‘What you don’t seem to realise,’ continues the woman hitting her stride, as I think, I do lady, I really do. ‘Is there’s nothing out there as nice as mine for the money. I’m not giving it away.’
I glance at my pad and the suggested asking price I’ve pencilled in. One £25,000 less than she’s grumbling about now. I’ve more chance of the dog liking me than its owner warming to my proposed course of action.

‘You people just try to drive prices down to get a quick sale.’ Rails the lady as her dog senses the antipathy and begins a soft menacing growl while it eyes my trouser leg again. Curiously, a disgruntled buyer unable to find anything they could afford accused me off pushing prices up to unaffordable levels, not thirty minutes ago. This isn’t a profession for insecure people seeking approval.

‘Any joy?’ Asks assistant manager T, as I slope back in the office, wiry hairs clinging doggedly to my suit, questioning of my parenthood, still ringing in my ears.

Now download the book it's cheaper than renting
http://amzn.to/ttGZ4j

18 months. Good. Her type - which is 95% of folk - are totally deluded. I await reality setting in, after years of price falls. Those who say we are different to US, Spain, Greece etc are in cloud cuckoo land.

Hmm, after wondering what to say about vendors like this, I think the quickest and best option for society is to lobotomise them...It's the only way of correcting them for the 10 years of property madness/delusion we've had in the UK.

Chin up. Your suggested asking price could look good after the Olympics.

Why don't people understand that estate agents want to shift houses fast and don't really care about the price as long as the commission trumps the time and effort (so a few per cent on 5K isn't going to make much difference)? It only requires a moment's thought to realise.

Are you getting a flood of trading downers? In the old days you just needed someone with a 10k deposit. Now it seems you need to find the elusive cash millionaire to start a chain.

when do you think reality will set in though (wholesale that is)? Seems to take a LONG time for anything i'm interested in, but it does come to the odd one, eventually!

Been waiting for reality for a while, usually takes death or divorce - so not wholesale.
S.A.