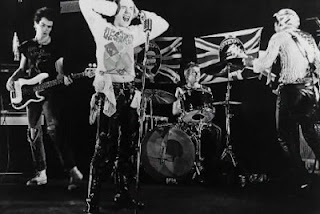 I don’t know half these people.’ I tell my wife, as we turn up at the Jubilee street party to celebrate 60 years of the Queen’s reign. In 1977 I bought The Sex Pistols, God Save The Queen, convinced anarchy would be a good thing for the UK. Now a load of royalists in 1950’s frocks they bought from one of countless charity shops in the blighted High Street, are singing rather engaging patriotic songs. Time and bags of equity in your home can soften the angriest of left-wingers.

I’m expecting some wag to buttonhole me and complain about property prices after a few glasses of punch. The old feisty attitude I wore, along with numerous lapel badges when punk rock was at its height, has been submerged for much of my working life. Hidden behind a sales’ smile and the slow leeching of establishment values into a philosophy that looks more and more flawed the farther into mortgages, pensions and savings you get sucked. I haven’t gobbed at anyone for thirty years.

Several drinks in and after three plays of a Vera Lynn compilation on the PA system, I start to loosen up. ‘This isn’t as bad as I thought it was going to be.’ I slur to my wife when she detaches herself from a gaggle of middle-aged women with dyed hair and vein-lined legs.
‘See,’ she admonishes gently. ‘These are really nice people. They’re the same as you.’
And the uncomfortable realisation I normally get in the shaving mirror, washes over me and replaces the light-headed rush of alcohol. With unwelcome clarity, I see I’m not the idealist with a full head of hair and a 32-inch waist any longer. I’m the same as them – just with better legs.

‘You’re the estate agent right?’ Questions the bloke from several doors up who washes his Audi TT as if it’s his penis. I don’t know his name and have decided he’s a knob, at least until he wants a valuation. I give a cautious affirmative and paste on the smile that used to be a snarl when I played Neat Neat Neat by The Damned, at full volume. I’m expecting some one-sided diatribe about prices and parasites, but he surprises me just as the Glen Miller album replaces Vera.
‘So what do you reckon on these solar roof panels then?’ The man asks eagerly, gleaming eyes of a zealot as bright as his motor’s metallic blue paintwork.

Now I have a tricky decision to make. One not helped by several glasses of disarmingly fruity punch and the bouncy beat of a big band I used to hate with a passion. I have to quickly remember if his roof has succumbed to the ugly panels, I’m convinced will turn out to be as big a miss-selling scandal as Endowments and Payment Protection Insurance, in time. It hasn’t. So I tell him what I think, in an uncharacteristic – in public – rush of honesty. There’s an uncomfortable silence then he laughs and says.
‘Yep, me too, I reckon they’re a bloody eyesore. Bunch of Polar Bear loving Greens with more money than sense buy them just to sop their conscience. It’ll take decades to get the money back and I’m betting the panels won’t still be working.’

‘Some nice people here.’ I slur to my wife as I start to feel semi-detached. Then the royalist versus republican argument breaks out from nowhere, as someone plays the National Anthem. While the temperature rises and storm clouds gather, a lairy bloke - who must be renting - starts to bad-mouth the Queen and I find myself reluctantly defending her. Obviously I can’t do the same for Charles, his tree hugging and his hangers on. It’s only thirty-five years since the bondage trousers and The Buzzcocks, after all.

‘That wasn’t helpful.’ Hisses my wife as the party disperses and the rain starts to fall. She has a point. I thought I’d defuse the situation by posing the Diana v Camilla question and asking who would shag Camilla?

But it got ugly.