Knowing Me Knowing You - Monday 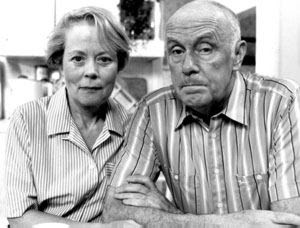 ‘You okay for a run of viewings later? We’re double booked.’ Asks assistant manager T popping his head round my office door and looking flustered. If you don’t do the viewings you won’t make the sale, so I urge my team to grab the punters and stick them in the car. All the while they’re with us they can’t be with the opposition. I do like them qualified first though. Are they motivated, can they afford it, are they in a position to proceed?

‘Yep stick it in the diary. I tell T, distracted by the fifteen e-mails that have popped into my in-box since the morning meeting. I could safely delete the lot without reading them with no consequences – probably. Once I’ve scanned the inane missives from head office, ostensibly to inform and educate me, but in reality a digital arse-covering exercise - with copies to all parties in the address book – I begin to question T’s motives.

‘Oh come on, not those wasters.’ I grumble once I’ve skulked into the main office and scanned the appointments diary. The name is a familiar one. A late middle-aged couple who have been looking to move for the best part of a decade. They have a house to sell, one I’ve valued at least three times in the hope of winkling them out and getting some commitment by going on the market. But they’ve steadfastly refused to play ball.

‘You always say, get them out viewing. You grumble if we don’t ask the question.’ Parries T, not unreasonably. The, don’t do what I do, do what I say; school of management is one I abhor, so when I’m shown to be practicing it I’m less than amenable. Nobody likes a smart arse.

‘But they are dreamers.’ I whine nasally, to admonishing looks from negotiator S and trainee F. I realise I’m sounding hypocritical and the feeling is underlined by T as he parrots me in saying. ‘Everybody has to live somewhere.’ I accept defeat with as much good grace as I can muster. I know I’m wrong. I know my team are right and secretly I’m pleased they’ve been listening. I just don’t want to listen to Mr and Mrs Barnes again.

‘Oh no this isn’t a patch on ours.’ Grizzles Mrs Barnes as she turns her nose up at the courtyard garden we are looking at. One that was photographed - admittedly with a wide-angled lens – and shown clearly on our website. ‘No, way too small.’ Agrees her sour-faced husband who I suspect has even less intention of moving than his wife, but just goes along with the annual charade for a bit of piece and quiet.

I had to collect the keys from the owner’s place of work, as they don’t like letting us hold a set permanently after a bad experience with another agent and a foreign floater in the pan, so now I’ll need to take them back before close of play and admit I’ve wasted their time - and more importantly mine.

‘I hope the other one is better than this.’ Complains Mrs Barnes as she eases her ample backside into the passenger seat of my car – they always insist on being picked up – and her husband sits in the back. ‘Have you thought any more about placing your own house on the market?’ I probe gently as we cross town through heavy traffic. ‘It would put you in a stronger position to move.’

Mrs Barnes scoffs in tandem with her husband and for the umpteenth time I wish I had a James Bond style ejector seat installed.
‘You lot are all the same.’ She begins acidly. ‘Just want to get your For Sale board up.’
‘You find us the right house and we’ll sell then.’ Adds Mr B from behind.

They won’t, because someone in a better position will beat them to it. The reality is they can’t accept having the best house in a crummy area means they’ve overspent. They won’t be moving during my career, something Mrs B confirms with the well-worn phrase.
‘What we’d really like is to pick our house up and move it.’

The get a caravan then gag, didn’t go down well.
Posted by secret agent at 8:48 PM

We don't take people on viewings unless they're on the market... Waste of time and petrol.

Carpet treaders - invite to Open Houses only or maybe view back to back with a serious buyer.