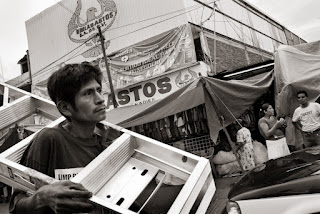 ‘What’s this guy’s story?’ Asks negotiator S breathlessly, as she watches a familiar car try and park outside the office. I’m always keen to fill S in, so I walk across to her desk as the battered Vauxhall starts to mount the kerb, hazard lights flashing, only to pull away again in a cloud of black rubber.

‘What happened there?’ Asks S distractedly, leaning towards the window and challenging gravity with that top-heavy blouse. I prepare to grab the flat-screen monitor as she strains. I can’t afford any more equipment breakages the way the P & L account is looking. Fortunately both décolletage and Dell stay upright and I spot another big tit instead.

‘Adolph alert.’ I say, by way of explanation for the rapid exit of our nearly visitor. ‘God you can tell it’s not raining,’ sneers S as we both watch the traffic warden skulk past with a look of frustration on his weasel face. ‘Or he’d be nowhere to be seen.’

‘Do you reckon they get paid commission like us?’ Asks S as the warden pauses and half looks through our window. I resist the urge to raise a single threatening digit in his direction. Best not to provoke these little Hitlers, they’re only following orders, plus I know I’ll have to risk double yellows and overstaying several times a week to stay employed.

After a brief discussion on the local authority’s seeming desire to turn the high street in to a post-apocalyptic retail wasteland, peopled only by charity shops and sentinel-like parking payment machines, we move back on to our first sighting. The Energy Performance Certificate man.

‘So he used to be an estate agent then?’ Says S in way of confirmation, after I’ve told her the back story to the guy who’ll return once he’s found somewhere to park.
‘Yes,’ I confirm. ‘He started soon after me but burnt out. Had a bit of a breakdown. Don’t mention his ex-wife.’ Even as I say it, I can recognise the symptoms. Too long dealing with the public and the stress of their home moves will eventually get to the most upbeat of operators. It doesn’t help if your wife is shagging your solicitor…

I go on to hurriedly tell S how the man, once he’d tried to punch the lusty lawyer, lost his home, job and dignity. The decision to retrain as a Home Inspector at considerable cost, to tap in to the supposedly lucrative Home Information Pack market, proved to be another mistake.

‘He must have been pissed when they scrapped them.’ Says S referring to the withdrawal of the pointless packs that everyone in the industry warned would be a disaster.
‘What did he expect?’ I say unsympathetically. ‘Built in obsolescence and a cost nobody wanted to pay. He’s just left with doing EPCs at fifty quid a pop.’
‘Nobody wants those either.’ Suggests S. She’s right. I’ve never once been asked for a copy of the bar chart-style environment saving certificates, showing how energy efficient a home is and could be.

Then the door opens and in comes the man in question. He doesn’t look happy.
‘Sodding traffic wardens.’ He opens sourly. ‘Don’t they realise we got jobs to do?’
‘Going well then?’ I say, as S goes to get the keys for the house in question.
‘If I could get the incompetent twat of a Housing Minister that started this nonsense I’d throttle him….or was it a her?’ Responds the carbon output checker.
As I recall the housing brief changed hands more often than a £5 note, around the time they introduced the legislation.

‘Got any more for me?’ Pleads the man, as he signs for the keys and takes a copy of the draft details. I have, but one of his competitors is undercutting him by a few pounds and the bean counter boss loves to look after the small denominations - appropriately enough he leaks hot air like an un-insulated loft. I answer with the sort of unconvincing, ‘I’ll let you know’, that owners give me after a valuation. He isn’t fooled.

‘Should have stayed where I was.’ Says EPC man morosely as he leaves. ‘The grass isn’t always greener.’

So true - the wardens here are so mustard they even book the blue badge holders for parking against the dropped kerbs.

This will add to your take on the poor DEA and what he has had to put up with. http://www.youtube.com/watch?v=sVg33LZ4Etk