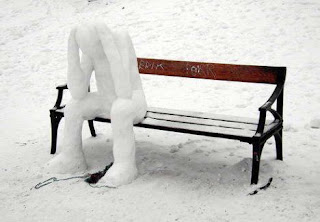 Even as I cross the icy park I know I’ll be first in the office. It’s just a question of what excuses for tardiness, or no-shows I’ll be listening to shortly. A ghostly figure sits slumped on one of the benches and for a moment I think one of the winos has frozen to death in-situ, but it turns out to be a rather sad half-melted snowman. I was told it would be childish to built one in our garden now the kids are at university. I still wanted to though.

As I pass the frozen sculpture, features gruesomely slipped like some pallid burns victim, I’m tempted to steal the knitted gloves and scarf in case we have more snow and I might actually construct my own snowman. I decide against it as several other early commuters are slip-sliding their way across the untreated paths. My reputation is already low enough, being seen robbing a child’s enjoyment would be a step too far, bad enough repossessing their parents’ houses.

‘Alright mate?’ Calls a voice tinged with Essex estuary. I look up to see one of the younger, fitter, flashier agents in town. He has a Burberry scarf round his neck that if I could catch him, punch him and remove without retribution, would look great round another cold-eyed zombie. Instead I return his greeting as neutrally as possible while trying to remain upright, as the path becomes ever more treacherous.

‘Loving this weather.’ Continues the lad in an unexpected dialogue. The scumbag is forever undercutting my fees and overpricing and I last, reluctantly, spoke to him when we were involved in a chain. Needless to say he knew nothing about the status of his vendors or their buyers, but then he’s cheap.

‘Why’s that?’ I ask, despite the more pressing need to remain upright in Oxford shoes. The soaking leather soles offer about as much grip as the aforementioned snowman’s frigid embrace.
‘Get a few pensioners falling over and a few more freezing to death.’ He laughs callously. ‘Should be a few probate sales coming our way.’ He doesn’t wait for my answer, his footwear seemingly giving more traction than mine.

‘That’s the sort of lowlife who gives your profession a bad reputation.’ Says the woman from the sandwich shop, as she too passes me, having heard the conversation. ‘We’re not all the same.’ I call after her hurriedly, in the hope of extra bacon in my next breakfast bap. The fact that I’ve often remarked to my team on a cold snap’s value in flushing out committed vendors – or at least beneficiaries – is best left to myself and discerning blog readers.

The office is as cold as a meat store when I finally get inside, having stooped to collect the post and stilled the alarm. Chances are the air conditioning engineer will finally turn up today, I think ruefully, as I see B, our lettings lush, has several messages flickering on her answering machine. I’m guessing burst pipes and failed heating systems. She’ll be in for a torrid morning, if she turns up. With her chequered love life and heavy drinking, the last thing she’ll need is more abuse before her hangover has cleared.

‘So how soon can you get in?’ I ask assistant manger T, testily. His car can’t manage the icy incline outside his fiancée’s house and it’s “not his fault”. He’s far from the only one on a slippery slope. Idiot trainee F is apparently “snowed in”. My sarcastic rejoin about being unaware he was weekending in Warsaw, fell on frosty ground. Fat mortgage flogger M is nowhere to be seen. You’d spot him if he were in the office - a regular one-man eclipse.

‘Just girl power and you so far.’ Suggests negotiator S as I abandon the morning meeting due to adverse weather conditions. I’ve inappropriately thought about being trapped in close proximity to S before, but it didn’t involve a diary of appointments needing rescheduling and a half-cut slapper arguing with tenants.

‘It’s not my fault you have water coming through the ceiling.’ Shouts B aggressively, breaking my daydream. ‘You should have called the f***ing 24 hour helpline.’

Get me the number.
Posted by secret agent at 8:02 PM

Almost as bad as my tenant that complained his blaocny got wet in the snow!

haha, common sense seems to go out of the window when it gets cold!

Do love your blog and the way you write. Cold weather, no one wants to come out in cold weather do they. They are either trapped indoors with a snowdrift at their front door, frozen to their sofas or booking online to get away to a winter sun holiday. I do sympathise.