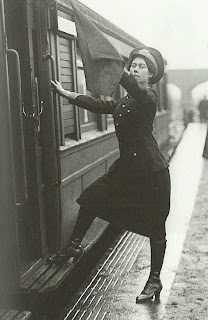 On the train to a meaningless meeting and I realise why I abhor public transport. I mean the concept is fine, you have to move the masses somehow and our towns are already choked with sign-written minis carrying estate agents, but like my job, planes, trains and buses would be fine if it wasn’t for the public….

‘I’m on the train.’ Superfluously announces the mid-thirties – she’d say twenty-nine – woman who boards the station after mine. I realise, as we get closer to the destination, some staring-eyed lunatic smelling of beer and body odour is going to want to sit next to me, but for the moment I have my briefcase placed strategically on the seat. The woman on the phone passes but takes the seat directly in front, as I notice with a heavy heart I’m not on one of those quiet carriages, with the no mobile phone stickers people ignore.

‘I’ll be getting off in about an hour.’ Continues the braying woman in the sort of voice that would break terrorists in a day if they piped it into their holding cell.
“Okay, the device is hidden at these co-ordinates just shut that f***ing woman up please – I couldn’t care less about the cause, I just can’t take any more of her social arrangements. Shit, I only joined so I didn’t have to shave.”

I’m already feeling out of my comfort zone. No clipboard to use as a shield, the car left in a parking slot with higher rates than a central London shop unit, and a meeting to go to that will sap my will to live before the first stale pastry has been downed.

‘This is Sophie Legge,’ squeals my tormentor with what I momentarily thought was a brash announcement from the guard, until I realise it’s the woman with no sense of her impact on others. ‘What’s the name of the girl I normally see, with the dark hair.’ Continues Sophie, who I’m already starting to hate with teeth-damaging intensity. ‘Yes Abbie, is she in?’ She’s not.

Not keen on eye contact usually, as it only encourages nutters to start talking to you, I gaze across the aisle to see if my fellow travellers are as annoyed as I am to be sharing Sophie’s hair appointment details. But the two people I can see are lost in their own little, earphone-protected cocoons, either taping their fingers or tapping their touch-screens.

‘Can I see someone else?’ Whines Sophie as we enter a tunnel and I suppress a sarcastic cheer. It doesn’t matter a jot, because as soon as we are back in daylight she’s dialling again. ‘This is…’ Sophie f***ing Legge, I mime in anger, as the call continues.

Nobody but me seems to care. I’m already feeling alienated as my trusty old Samsonite looks as anachronistic as my old school Nokia. The men around me have satchels and man bags and are all sporting I-Phones, a Samsung Galaxy, or something called an HTC. One I’m able to read at the next stop, as a tubby girl in leggings brusquely asks if anyone is sitting by me, before flopping her fat arse in the space my briefcase has only just vacated.

Now I have two irritating distractions. Sophie is telling her luckless boyfriend she’s forgotten her keys and will need meeting at the station, and the twelve-stone student, is arranging her night’s social events by scrolling from Facebook, to Twitter and back while presumably ordering more take-away pizza. My newspaper makes me feel like an alien - particularly as I paid for it.

‘Hello, it’s Sophie Legge, you left me a message.’ God knows why, I mutter to myself, as porky-fingered Media Studies girl, chuckles at some inanity she’s just sent with an OMG and at least one LOL, appended.

Sophie continues a confused conversation with some unfortunate female beauty enhancement service provider, who probably offers cuticle filing, Botox injection, or dead foot skin removal by fish, as I look in vain for the old emergency pull-cord they used to have on the slam-door carriages.

Once the train has stopped and you get off, it’s tricky to throw yourself under it. So I go to the meeting.

I read your blog on my smartphone whilst on the train all the time.

I have been feeding students for some time and unless you've bought the book - a very reasonable £2 few pence of your grant - I'm still hungry... :-)
S.A.

your such a grumpy git! but its nice to hear about estate agents in pain. Shame its only orally induced ooer!