Ready Or Not - Monday 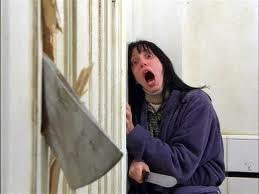 ‘You reckon there’s anybody in there still?’ Asks assistant manager T glancing across the road nervously.
We’re parked opposite a run-down mid-terrace house with signs of neglect. The paintwork is peeling, at least one slate roof tile has slipped and a gutter shows signs of prolonged leakage.

‘Probably long gone.’ I tell him with a little more confidence than I’m feeling. Repossessions are never fun, but if the defaulting borrowers are still inside they can get really messy. It’s partly why I have T with me. Not that he’d be useful for muscle with his wiry frame and wire-framed glasses, I just want to be in and out as soon as possible. He can help with the measuring and take the photographs.

‘Ever get the feeling you’re being watched?’ Asks T, glancing at the surrounding windows, where I’ve seen several net curtains twitching already. We were lucky to get a parking space in the car-choked road, one not really designed for the two-vehicle family. The local authority have issued residents permits and turned the road into a one-way system but it still feels more like a linear car park than a once pleasant Victorian neighbourhood.

‘They’ll know who we are.’ I tell T glancing at my watch and cross checking it with the dashboard clock. Five minutes until the appointed time. ‘Just as well this motor isn’t sign-written with the company name.’ I add. T chuckles. ‘Yeh, I bet those guys spend a lot of money at the bodyshop.’

I’ve had my car deliberately scratched of course and we’ve had some unpleasant deposits through the office letterbox too, one’s that definitely weren’t recorded delivery. But then estate agents have never been that popular. Repossess a house and you’re even less likely to get a Christmas card, and I certainly wouldn’t be able to send one back. Never sure which bed and breakfast the council will use next.

‘What do you reckon those two are up for?’ Posits T, nodding towards the opposition agents’ boards we can see further down the road. He should know, so should I but secretly being on each-others mailing lists so you could tap-up the competitors register isn’t as necessary as it used to be, with most agents all on the same property portal.

T fingers his smart phone for a few minutes and brings up the properties in question. I couldn’t do that with my ancient Nokia, but I keep it as a stubborn, almost Luddite-like, badge of pride.

‘Whoa,’ he announces, spinning the screen towards me. I squint until he does that expanding with your fingers trick. Reading glasses are months away. ‘They’re going to be pissed when ours comes on.’ Predicts T with a smirk. The lender will have my report and recommendations on price – which they’ll ignore – followed by two independent surveyors suggestions, before the marketing price is set. The only thing certain is it will be a lot more realistic than the two homes nearby - about £20,000 more realistic at a guess.

‘Here comes the locksmith.’ Says T nodding towards a white panel van easing its way through the tightly packed cars. Then as the van passes I see the bailiff hurrying up the road, long coat flying behind him.

I clamber out of the car, back grumbling with the motion, and T follows me clutching the digital camera. The bailiff recognises me. I feel the curtain movement all around and make sure I blip the remote so the car is only vulnerable on the outside.

‘Morning all.’ Greets the bailiff chirpily, as the locksmith joins us. He’s double parked blocking the street and is hefting a big clunking bag and clutching a massive cordless drill that sports a brutally menacing bit on the end. He’s clearly not planning on staying long.

The bailiff is a weasel-like character, and has a wispy moustache presumably through choice rather than for charity. Like T, the man is surprisingly slight of frame, but then if there’s any resistance he’ll just call the police and we’ll all get back in our cars and watch.

I still hate this bit, I think, as the bailiff checks his watch, glances at the paperwork then asks: ‘You ready?’