Stand Well Back - The Weekend 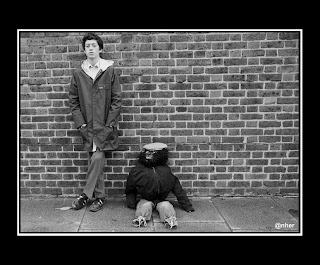 ‘If anyone starts on about estate agents and property prices I’m going home.’ I tell my wife as we walk in the early evening darkness, shopping bag clinking with alcohol.
‘Don’t be so stupid,’ she chides.’ You know people love to talk about it, just grin and bear it.’

I’m tempted to take her literally if some braying twat does quiz me on why their home is no longer outperforming their shares portfolio? A rictus smile and lopping my todger out would really cause fireworks. Instead, I just scowl at the hooded teenagers skulking past on the opposite pavement with mischief in their eyes – if I could see their eyes.

‘So you lot don’t mind the economy going down the toilet do you?’ Opens a ruddy-faced inbred, as behind him the host tries to ignite the green-timbered bonfire with local newspapers that contain my company’s property adverts.
‘How do you mean?’ I reply tersely.
‘Well you get the repossessions when people go belly-up anyway. It’s a win-win for the likes of you.’

Patiently, more patiently than the bonfire tender, I explain how we’d rather not stand next to the bailiff while he evicts a family who got it wrong and probably bought their failing endowment policy from M, my fat mortgage man, or a slimmer, slipperier version of him. But it’s a waste of time, as are the animated efforts to ignite the damp wood the increasingly annoyed pyromaniac is going through.

‘I’ve just had a bank of solar panels fitted to my roof,’ waffles a crushing bore who has been directed my way by someone who clearly doesn’t like me – the choices are endless. I’m tempted to tell the green sun-catcher he’s probably down-valued his home, at least aesthetically, and the payback time with the watery sunlight we get for two-thirds of the year will probably stretch into three decades. I might even have cleared my own mortgage by then. I’d be wasting my time though as this guy is a planet-hugging zealot.

‘It’s not all about the finances.’ He drones, as I swig deeply from another bottle of beer and think: it is if the locksmith is waiting to drill through your keyhole matey. ‘We have a wider responsibility to preserve this world for those yet to come.’ He continues, as I watch the host emerge from a garden shed with a plastic petrol can and a look of determination.

I’m half way back towards the house, eco-man left strategically in front of the smouldering pyre, when there’s an almighty flash of fire and more gasps that the few weedy roman candles so far, have occasioned.

‘Get back down there and see if he’s alright.’ Hisses my wife as I ponder how slowly I can lope without seeming cowardly. I have a reputation to maintain after all. While a clutch of women and one terrified Labrador whimper softly, I join several other men approaching the now blazing pile with caution. It’s as though someone has tossed a few dozen Correx for sale boards on the fire, they burn brilliantly but briefly – or so I’m told.

‘I reckon we’re all going to get our fingers burnt.’ Proclaims some wag to chuckles, as later, the few remaining partygoers sit in the lounge and talk drunkenly about – yes – property. The bonfire man, with singed eyebrows and no hair left on his forearms, bemoans the fact his teenage kids will never be able to afford to buy with the prices as they are. I refrain from telling him they nearly inherited a house an hour ago, plus considerable savings on a cremation.

The curt reminder home owners were happy to have rocketing prices until they wanted their adult children to leave proved explosive, after that it all rather fizzled out.
Posted by secret agent at 8:45 PM

"The curt reminder home owners were happy to have rocketing prices until they wanted their adult children to leave proved explosive, after that it all rather fizzled out."

Indeed. People don't want inflation yet they want to be able to sell their goods/services for the highest price. And they vote the shysters in who will borrow vast amounts and decimate our currency.

Economy is toast. And its going to last many years. How's that going to affect house prices and sales volumes? ER...

I think I might hate people as much as you.

I knew there was something wrong when dentists stopped filling childrens' mouths with mercury when they were no longer incentivised to do so.

"The curt reminder home owners were happy to have rocketing prices until they wanted their adult children to leave proved explosive, after that it all rather fizzled out."