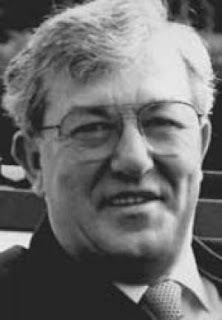 ‘He might explain it.’ Posits lettings lush B as I enter the main office after a fractious phone call with my bean counter boss. Negotiator S looks at me expectantly, as B returns to her monitor with a hint of a hiccup.

‘Explain what?’ I ask cautiously. Being the oldest and greyest in the office doesn’t bring too many privileges. The ancient elder in a sales tribe doesn’t get first dibs on nubile team members. More likely, after my conversation with the boss, they’ll be sent away to die quietly like some wrinkly elephant - either that or a sheltered retirement flat.

‘Equity release schemes.’ Says S, bringing me back to a world of ramped-up targets, cutthroat competition and performance review meetings. There are no orange emergency pull-cords here. If you fall nobody will pick you up.

‘Don’t they advertise those on daytime television?’ Offers trainee F hesitantly. Before I can ask how he gets to watch the box when he should be working, he continues. ‘That bloke who used to be a weather man recommends them.’

‘If it’s the tosser who said there wouldn’t be a hurricane,’ chuckles B throatily. ‘You might as well ignore that.’ B is at least old enough to remember Michael Fish, possibly because she drinks like one, but it turns out it’s Bill Giles.

‘Only,’ picks up S. ‘I have an elderly couple who want some advice as to whether to sell and downsize, or stay put and release some capital. They are happy for you to go and see them.’ Of course they are, it’s a free, no-obligation, valuation. I have a hankering, when and if I retire, to do the same. Call out agents with no intention of moving just to have someone to talk to. Just to moan about immigration and the poor rate of interest on my savings.

Hypocrisy is a sly affliction, which creeps up with age. It turns gay liberals into drab capitalists, human rights tofu eaters into hang ‘em and flog ‘em carnivores and idealistic punks into cynical old men. I spend my days despising people who waste my time and yet I’m already thinking of doing the same. You get a lot of self-loathing when your working life is relentlessly documented on Excel spreadsheets.

‘It’s more a financial consultant’s bag.’ I hedge to a wounding look of disappointment from S. She still likes to help clients. I do in the final analysis. I’m just more weathered and worn.
‘I’m not handing them over to that sleazeball.’ Counters S magnificently, her breasts heaving in distracting indignation.

M our bloated mortgage man is on holiday and his cover is the sort of oily figure-fiddler who, when I first started, had a mullet haircut, wore turn-up trousers, paisley ties and flogged endowment mortgages. I wouldn’t trust him with a family pet.

‘He’s the company approved conduit.’ I say shamefully, actually feeling my cheeks colour for the first time since the lift was out on the ex-council tower block with sub-standard construction. S looks at me disapprovingly and I crack.
‘Book me in then, just don’t blame me when you are half way down the licensed introducer’s league table.’
I’m secretly proud of S. I hated pushing product for banks, building societies and insurance companies when they piled into estate agency. But then they were our new masters and even I bought an endowment that isn’t going to pay off the loan. I have a nasty feeling equity release might become another scandal like Payment Protection Insurance – at least that’s my forecast.

‘We’re not really from the buy now, pay later generation.’ Says the wrinkly husband when I sit in the couple’s lounge later. Good for you mate, I think. I’m pretty sure your beneficiaries will be pleased too.
‘What would you do in our situation?’ Asks his matronly wife sweetly. I toy with telling them what I really think. Ache to spew out the wisdom of more than one property crash and several corporate owners with only the balance sheet and shareholder dividends in mind. What I actually say is:
‘Unfortunately I’m not authorised to give financial advice but I could arrange for one of our consultants to visit you.’

It just creeps up on you.
Posted by secret agent at 7:32 PM

I got out of the business at the end of the eighties when the banks and Insurance firms bought up thousands of local agents. Suddenly I was no longer selling houses, but mortgages. IT seemed to me it was doomed to failure.

Remind me whatever happened to Black horse,Prudential property services and all the other bank Johnny come latelies?

I have often wondered if the genius directors who spent hundreds of millions of share holders money buying up all these over priced agencies, just before a huge crash in the property market ever got the sack for such stupidity?