Who You Gonna' Call - Halloween 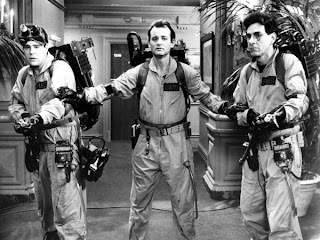 ‘Do you think we should have dressed the window with a Halloween theme?’ Asks negotiator S breathily. An unhelpful image of a buxom witch with legs way better than a frog’s materialises in a flash. The human resources coven wouldn’t like this sort of thought crime, I think hurriedly, as I try to ensure my face doesn’t betray my true emotions. Fortunately years of dealing with the public helps.

‘It just looks like a naff cash-in.’ I finally reply, referring to our rival’s frontage, which is cluttered with garish ghoul-based items. You can almost smell the sick-making stench from the pumpkins, the Scream-franchise mask is probably a reflection of their asking prices and I’ve a feeling the cobwebs were already attached to the window display.

‘Yeh, but you never want to join in on the fun stuff.’ Continues S, as I stifle an inappropriate reply that would definitely cause a horror show and probably a sexual harassment claim as well.

S is referring to my seasonal stubbornness. Decorations of any kind – other than sold slips – are anathema to me. Every Christmas there’s a running battle over the validity of a naff plastic-figured crib scene, finding marketing space in the office window. My gag about not wanting first-time buyers to think it’s a scaled down barn conversion for sensible money, wears thinner than my hair, each December, but I persevere.

‘You know what your trouble is don’t you?’ Chips in assistant manager T with the sort of pre-cursor I hear from my bean counter boss at every performance review.
‘You just don’t want to move with the times.’ Continues T, undaunted by a fright-night-worthy scowl and my half-formed spell inflicting something unpleasant on him – other than his current career.

‘People love Halloween.’ Urges T. S nods in agreement, as do her breasts. ‘It’s a good way of drawing attention to the window display.’
‘You’ll be suggesting we all dress up in zombie costumes like those idiots at Tesco Express.’ I say scornfully. T’s face falls and I realise that’s exactly what he wants to do. I can understand one of our local surveyors mimicking the living dead as they’ve killed enough hopes, but I draw the line at cheap American imports - particularly after the last Top Model series…

Mortgage man M waddles through the door clutching a bag of doughnuts and I look to him for support, but before I can enlist his help he says.
‘That crazy crew in the convenience store are all in costume.’
‘The boss thinks they look tacky.’ Interjects T with a look of distain.
‘The only things scary in there is that bloody self-scanner.’ I grizzle. Aware I’m coming across as a misery but unable to stop myself.

‘I guess they didn’t have Halloween when you were a boy.’ Posits S in a conciliatory manner. She’s right, I hadn’t heard of the festival until my kids were small. I still frown at calling round to strangers’ homes and asking for favours – even though that’s what I do most working days. I don’t get given many treats mind…

‘We just did Guy Fawkes night.’ I tell her, suddenly feeling old and spent again. ‘And before you ask,’ I add quickly. ‘We don’t want some dummy in raggedy clothes in the window either.’ As I say it - whiz-bang on cue - imbecile trainee F returns from a viewing, tie crooked, shirt hanging out.

‘What?’ he pleads as the office rocks with laughter. Tears wiped away, I ask everybody to get back on task. F still looks at me bemused but that’s nothing new. I sit in my office and chuckle softly. Sometimes this job drains your life force just as surely as fangs at a jugular, but just occasionally you wish the moment would last, that you could live it forever. Then the bean counter rings.

‘Your fall-through ratio isn’t looking to healthy.’ He carps, as I toy with the letter opener menacingly. ‘Is there no way you can resurrect any of them?’ A tsunami of sarcasm bubbles-up, potion-like, in my throat as I long to tell him what a nightmare he is to work for.

The scream was silent – but no less heartfelt.
Posted by secret agent at 8:34 PM

"As I say it - whiz-bang on cue - imbecile trainee F returns from a viewing, tie crooked, shirt hanging out."

Genuine laugh out loud there SA! Good luck with the beancounter...

Who you gonna call? Secret Agent!

Nominated you for the blog awards as well, would be nice to see some recognition!

Thanks you really make my day. The most interesting part is that daily telegraph also like your blog I think a lot.