You Don't Bring Me - Tuesday 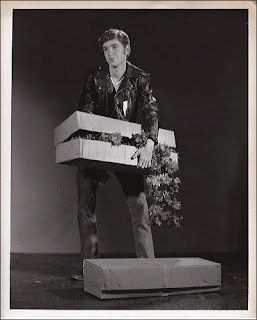 In to the office comes a woman clutching a bouquet of flowers. She looks a bit lost, so I’m wondering if she just wants directions, but she glances at a delivery note and calls out S, my well-upholstered negotiator’s name. She’s not at her desk so I rise to meet the florist, who eyes me suspiciously.

‘You can leave them here.’ I tell the driver, indicating S’s prime position in the window - a tempter to encourage punters to come in and see what we have on offer.
‘I’ll need a signature.’ She counters defensively. Why is it people don’t trust estate agents? It’s a mystery to me…

I scrawl my initials illegibly, like I do when I sign the bailiff’s possession warrant once we have the new keys to someone’s ex-home.
‘You’ll need to print your name too.’ Huffs the bringer of over-priced pollen and hay fever. Reluctantly I give up my surname, something I’m keen to avoid more and more nowadays. At least it wasn’t a recorded delivery those tend to bring only bad news – threats of legal action mostly since we no longer have a lottery syndicate.

‘Someone’s trying to get into S’s good books.’ Posits assistant manager T with a smile, once the florist has left. That or her knickers, I think cynically. And as I didn’t send them I’m guessing the unworthy boyfriend is trying to patch-over another bust- up. She should ditch him, but then as few people listen to my advice – particularly on asking prices – I could be wrong.

‘Shall we read the card?’ Asks T raising his eyebrows back and forth like some youthful Roger Moore – admittedly a hard image to conjure.
‘You can’t do that.’ Slurs lettings lush B from her desk, before adding. ‘Can you?’

B is so close to my shoulder I can smell the heady mix of something from Giorgio Armani and Gordon’s, as I prise open the little envelope. I’m pleasantly surprised, something that doesn’t happen too often in this industry. It’s a thank-you card from one of our vendor’s who recently completed on a nightmare sale. One S nursed along with all the skill of a true carer, as surveyors, solicitors, truculent buyers and a protracted chain, all conspired to rob the sellers of a dream and us of our commission.

‘She deserves these.’ I proclaim, trying to reinsert the card and seal the envelope back down.
‘They probably want a discount on the fee.’ Suggests T with a grimace.
‘No,’ I contradict less than convincingly. ‘They just recognise good service over and above what’s expected.’
‘I never get flowers after I’ve helped someone out.’ Grumbles B, tottering back to her desk, unsuitable heels pock-marking the fake laminate again. They don’t even ring, I think, uncharitably – unless it’s the STD clinic.

The fact is a good agent often earns their fee long after the first flush of adverts, viewings and – hopefully - offers. It’s when the inevitable problems start the agent often adds real value. Something the fee-cutters can’t or won’t do. I could count on one hand the number of sales that have gone smoothly once agreed, over the years, although trying to convince owners up front of this fact when all they see is a suit and a looming bill, isn’t so easy.

‘Someone’s performed well.’ Teases T, when S comes back from lunch. She blushes a fetching crimson, something B hasn’t done for a while I’ll warrant.
‘Who’s it from?’ I ask neutrally, to a groan from B and a stifled giggle from T.
‘What?’ probes S sharply. She’s nothing if not perceptive. ‘You’ve peeked haven’t you?’ She follows up, chest heaving indignantly.

The joint chorus of denials wasn’t that convincing, on reflection, but flowers – and shoes apparently - can soften the sharpest of female intellect. S coos over the imported blooms, all thoughts of air miles and the dying planet jettisoned in favour of something exotic from Africa that doesn’t involve antibiotics.

‘Oh that’s really thoughtful.’ Says S, voice thickening with emotion.
‘You worked your socks of for that one.’ I respond, immediately regretting a phrase that suggests S disrobing. I probably need another staff sensitivities awareness course.

I still have a nice warm feeling though.

When is Volume 2 of Agent's Diary coming out?

I need more to read on the train!

Harry, I hope to have all new book-length material out for Christmas, titled The Secret Agent - A Year In The Life. Volume 2 of 'Agents Diary' to follow.
All the best and thanks for reading.
S.A.

Since when did an estate agent think he could accuse someone else of overpricing! I dont see florists adding x% every year to their prices! cos property only ever goes up - I think the tide is about to turn again re: double dip 2011/2012........