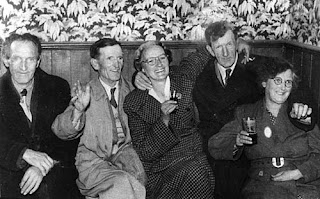 I walk into the third pub of the evening and feel an initial sense of relief.
‘This is more like it.’ Announces my drinking buddy enthusiastically as he scans the clientele.

The night out, while womenfolk drink wine, eat nibbles and exchange gossip at home seemed a good idea at the time, but after two hostelries with bouncers on the door and a drinking demographic more aligned to my kids than me, I’m beginning to yearn for News At Ten and a coffee.

‘Full of hot totty.’ Continues my pal heading for the bar. He’s on his third marriage and scouting for girls who might audition for number four. Like most multiple divorcees his standards are dropping in tandem with jaw-line. The pub is full of primped, Rosemary Conley-starved, and botoxed women of a certain age - the sort who look far better from behind. The men are not bothering to make such a sartorial effort. I see, overstuffed jeans, shirts worn outside not concealing bellies as well as owners would like to think, and principles disappearing faster than wallet contents.

‘We’re being given the eye.’ Contends my companion, once we are crammed into one corner clutching our third pint in quick time. My stomach is gurgling like a drain with the unaccustomed intake as I scan the bar hoping I don’t spot a client. I’m regretting my gung-ho affirmative to this whole outing. I should have stayed upstairs watching the spare television.

‘Two heterosexual men with their own hair and limbs must be quite a draw in here.’ I whisper nervously.
‘This is brilliant.’ Replies my friend, seeming oblivious to the cost of another matrimonial and his relentless slide back down the property ladder. I won’t even get his house sale, as his third wife doesn’t like me much.

‘Why did you tell them you were in property?’ Gripes my buddy when we leave the pub and head for the curry house, my stomach whimpering in advance even before we smell the spices. Because it was a shore fire exit strategy - with the age of our sperm-suitors I was pretty sure they’d have some property horror stories to deflect their ardour.

‘F***ing estate agent.’ Cries one of the women at the mixed-gender table next to us even before I’ve ordered poppadoms. Predictably, it turns out to be a complaint rather than a suggestion and I have to sit through a raft of derisory comments about the industry, biting my tongue, indigestion bubbling. I want to go home.

‘Everything ok for you?’ Asks the waiter distractedly as another group of liquored-up louts stagger in noisily. Not really, I think, but I answer affirmatively and see in his fleeting eye contact he hates punters as much as I do.

‘Lap dancing club?’ I whine. ‘Are you mad?’
‘You need to get out more.’ Giggles my friend, eyes unfocused. I was imagining the exact opposite. Even Eastenders and a shared bag of wine gums seem attractive now.

‘I’m thinking of a taxi.’ I say weakly, to a grunt of derision. I’ve seen the look before and unlike the alcohol intake, I’m impervious to it. The thought of some seedy commercial unit where bored Eastern European women in Ann Summers underwear try to engage you in conversation doesn’t appeal - not least because even in Krakow they hate estate agents. If I need to shove high denomination notes into women’s clothing I’ll take my wife shopping.

‘You alright?’ Asks my missus as I stagger back from the lavatory early hours, dehydrated, having tossed and turned all night, curry leaking from pores I didn’t even know I possessed. I grunt an unconvincing yes.

I’ve been fretting about figures again – there’s a meeting with my bean counter boss tomorrow. And I’m likely to be the one over-exposed this time.

"If I need to shove high denomination notes into women’s clothing I’ll take my wife shopping."