Window On The World - Thursday 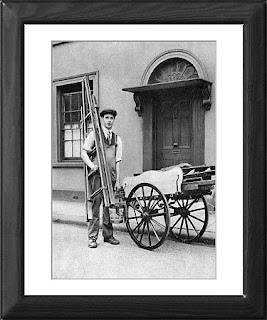 As I approach, suppressing an audible curse, I see someone has smeared takeaway leftovers on the office window again. I’ve avoided the few winos awake in the park asking for alms and it’s too early for the persistent Big Issue seller, but there are still a few people around to see my anger.

‘That doesn’t look too tasty.’ Joshes a familiar voice and I turn to see the hobbling banker. His other hip needs doing now and although I don’t need to hear any more sob stories about how the industry has changed and he’s expected to be just a “common salesman”, it does cheer me briefly when I see he’s worn even worse than I have.

‘It’s disgusting.’ I reply shaking my head.
‘The pizza or the prices?’ He rejoins with a reedy chuckle. I give him a wan smile, it’s the sort of cheesy gag I’d have employed if the roles were reversed, but for the moment I’ve seen enough mozzarella – and enough mortgage floggers.

‘What people forget,’ I bite predictably, rubbing a cautious finger on the congealed smear. ‘Is we are employed to get the best possible price.’
‘Yeh,’ he concedes with a twinkle in his eye. ‘But there are some things that just can’t be swallowed.’ And he points to the over-priced apartment that’s been in my window longer than the dead wasp the cleaner keeps missing.

‘You know that block has a dodgy lease.’ He teases, leaning towards me then wincing pleasingly as something in his pelvic area grates, bone-on-bone.
‘I didn’t hear too many objections when your lot were advancing five times salary on the place a few years ago.’ I return tartly.
‘Head office, not me.’ Says the banker. ‘I always knew it would end in tears but I had targets to hit, payment protection to sell – my own mortgage to pay.’

‘You going to wash that off yourself?’ He continues, almost joyfully. I look at the hardened mix of dough and topping. It will take hot water and some elbow grease and the window cleaner only comes once a fortnight since my bean counter boss embarked on another round of myopic cost cutting, with little understanding of the front line consequences.

I tell him about our paucity of ancillary service providers. The useless contract cleaners, the cancelled milkman who couldn’t provide a monthly invoice and wanted petty cash we were no longer allowed to spend, the odd job man who used to fix minor carpentry and electrical problems. All axed, as they didn’t conform to either health and safety absurdity or head office accounting procedures.

‘We’re the same.’ He sympathises. ‘I answer to some women fifteen years younger than me with a degree and a sense of entitlement. She knows naff all about maintaining local business relationships but everything about escalating sale targets and PowerPoint presentations.’

‘Hopefully she’ll get pregnant and leave for a while.’ I suggest, starting to tire of the conversation.
‘She tends to do her screwing in the office.’ Replies the banker sourly, before looking at his watch nodding a goodbye and hobbling off, just as negotiator S crosses the road looking devastatingly alluring.

‘Morning.’ I say throatily, the thought of someone screwing in the office rebounding round my head unhelpfully. She returns my greeting then her pretty features frown as she sees the window.
‘Oh not again. What’s with these people?’
‘They don’t seem to like estate agents.’ I reply with a wry chuckle, thinking present company excepted. She’s had two bouquets of flowers and a box of chocolates delivered already this month – none of which were from me.

‘I just don’t get it.’ Says S with a shake of her head. ‘We do our best to help people and they don’t appreciate us.’ Some do, I think, as I stoop to unlock the door and my own muscular pain shoots down one leg.

‘Do you want me to get some hot water and rub it away?’ Asks S. Momentary internal confusion banished just before I make a fool of myself, I take the washing-up bowl outside and start to clean up someone else’s mess.

Are you actually selling anything at present?? I can't remember your last post which mentioned a successful sale!

Still selling, they always do if the price is right....
S.A.

I had to be told I was a being a duck egg a few times before I realised that a business couldn't be run on spreadsheets alone.
It's a shame, because staring at a screen and categorising what people did a month ago in ignorance of context was much easier than actually working.

Why do you bother with premises? Why not just get yourself a website? I predict "traditional" estate agents will be extinct by the end of next year. In the absence of Tesco's setting up in competition to Rightmove, I'd only ever use an online agency now - half the commission of a high street estate agent, what's not to like?

Hopeful for prospective results by this technique.