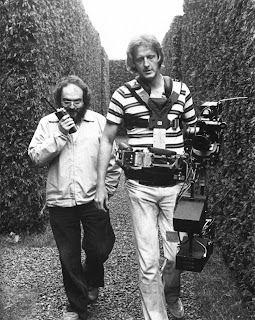 As we drive towards the dreaded Ikea building I feel the sort of rising panic those with irrational phobias experience. There won’t be snakes or spiders as far as I’m aware but already I’m coming out in an unlikely cold sweat, as my wife tells me to stop being absurd.

Despite her words of admonishment I still remember my first trip to the soulless blue building. The disorientation of the vast hanger made me realise my envy of the commercial agent boys who don’t have to deal with the public direct, would stay a misplaced one.

‘You’re just being ridiculous.’ She chides, as with the looming approach of the architectural carbuncle - one Prince Charles must dislike as much as me - I continue clocking other agents boards and wondering how overpriced the homes are, and how long they’ve been on the market?

‘I just don’t see the point. Where’s the enjoyment?’ I ask as she pulls into the car park and I wish I’d volunteered for weekend cover in the office - or at least driven myself and become conveniently lost. Something I’m contemplating still, once we’re inside the retail labyrinth.

‘The point is, it’s fun.’ Says my wife curtly as she takes a barrier ticket and I prepare for further pain while she tries to park vaguely parallel to a marked bay.
‘Only if you’re a masochist.’ I gripe. ‘If I wanted a migraine and to get hopelessly confused, I’d visit a maze.’
‘It’s great value.’ Perseveres my spouse pointlessly. So is Poundland I think miserably and I won’t be going there again either. Petulantly, I traipse after her towards the entrance wherever it is.

A friend of mine’s elderly parents supposedly visited an Ikea multi-storey excretion somewhere on the south coast. After parking they became so disorientated on the vast lift and escalator warren that they couldn’t even find the way in. Wisely they went home without getting as far as the entrance and had John Lewis deliver.

Being a wage slave I’m fully aware of corporate branding - I have the marks to prove it - but surely Ikea should paint their units pink, not blue, as it’s such a girl-thing? I’m wondering why the Property Mis-Description Act doesn’t apply here. And I still don’t understand the truncated trolleys with the yellow bags, you have to awkwardly attach, and are not allowed to take to the car park with you at the end – assuming you’ve found the checkout and not run screaming from the nearest fire exit. I mean any shop where they have to put arrows on the floor to force you along like animals in an abattoir, should look again at the experience.

‘Hello mate.’ Calls a male voice as my head throbs and I stagger dizzily inside a web of mocked up bedrooms with labels in Swedish I can’t fathom. For a moment I think it’s some sleazy salesman trying to flog me a new kitchen, until I remember MFI went bust – possibly for not listening to what customers wanted. I look at the man awkwardly trying to remember if he’s a vendor – unlikely as he called me mate – a purchaser, or one of a myriad of other trades I mix with in the property business. Then it clicks. He’s a rival estate agent.

‘I’d rather be at the office than here.’ He confides, as I think he looks a lot more human in jeans and a t-shirt than the suit I usually spot him in, when he’s exiting a valuation I’m doing too. As his hyperactive son collects dwarf pencils that look sharply effective for stabbing Scandinavian marketing men with, I find common ground with someone I’d happily run over on a weekday - if it weren’t for all the surveillance cameras.

‘I only come for the meatballs.’ Continues the rival, before leaning in and nodding towards his attractive wife adding: ‘And the gratitude shag later.’

The dining hall reminded me of school dinners, and the Zimmer frame food-tray-trolleys, of sheltered retirement homes. I over-ordered on the meatballs and overspent at the checkout.

I’m not sure how grateful my wife was in the end, as the headache grew until I became queasy and went to bed early with reflux and some Rennie.

Curious choice of photo for this posting; looks vaguely 70's-80's fashion, but the guy on the right is wearing a SteadiCam - which I thought was newer - but I now read it made it's debut in 1976. It's a contraption you wear to keep a professional movie-camera steady for tracking-shots.

Shot is from the maze used in the Stanley Kubrick movie The Shining c.1980.
S.A.