Are You Sitting Comfortably - Wednesday 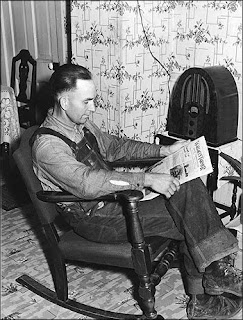 ‘What’s this bollocks? Demands assistant manager T, referring to a pile of corporate paperwork on his desk.
‘Could you narrow it down a bit?’ I ask him wearily. Time was when you came to work, flogged a few houses, took the plaudits and commission and went to the pub. Now I’m dogged by cumbersome legislation making me a quasi-expert on health and safety, property mis-description, data protection and sexual discrimination – to name but a few.

‘This.’ Clarifies T prissily, waving a multi-page self-assessment form some jobs-worth in human resources has produced on their Apple Mac. ‘What the hell do they think we do all day? I haven’t got time to fill this crap in.’ He probably has as it happens, but he doesn’t want to – neither do I.

Fig 1 on the first sheet is entitled: Summary of the subjects dealt with in the minimum standards for workstations.
‘That’s not a summary,’ says T articulating my thoughts exactly. Only I can’t agree with him, not verbally anyway. I’m management and so by definition complicit in the pile of steaming tosh - almost as if I’d squatted it out myself.

Beneath the clumsily worded opening is a line drawing of some sexless individual parked before a desk, keyboard and monitor. Their chair, screen, printer, and footrest are all numbered. A separate sheet gives a side-on elevation an architect would be proud of, detailing the optimum lumber recline angle, reach to keyboard, distance and angle from monitor.

‘Who has a feckin footrest?’ Mocks T reading the notes disdainfully. ‘You just stick your foot on a stationery box if it’s aching.’
‘Not supposed to have anything unauthorised under the desk.’ I tell him as negotiator S floats through the door looking alluring – and distinctly unauthorised.

‘You seen this pile of steaming shite?’ Asks T angrily. ‘They can’t replace our cars but they can afford to produce a tome on postural change.’
‘It’s probably meant to help.’ Suggests S pleasantly.
‘Meant to stop them from getting sued more like.’ Snaps T. He’s right of course, although I don’t like the term “them” when referring to the company you work for. It’s the sort of cop-out you get in retailing when you ask about stock availability, or delivery problems – but in this case I’m feeling sympathy.

‘Just fill it out will you please.’ I eventually offer lamely, stopping short about mentioning repetitive strain injury - despite M’s vigorous jerking motion in my direction.
‘Don’t think you’ll be getting a new chair because of it.’ Predicts M sourly. ‘My squab is saggier than a pensioner’s parts and they still won’t replace it.’ I could point out his arse alone probably exceeds the maximum safe load, but there’s a whole separate worksheet on approved lifting techniques, with a graph to match. Sometimes you can have too much information.

‘You seen the section on postures and spinal injuries?’ Asks T, comprehensively ruining any thoughts of moving on to fee-earning activities. We all crowd round the previously unseen double page spread featuring what looks disconcertingly like an un-pc naked woman, bending and flexing into slightly risqué positions. She’s perched atop some bar graphs with percentage pressure increases on one axis, and relative changes in pressure/load to the 3rd lumbar disc - experienced in various sexual positions - on the other. All it needs is that bloke with the beard from the Joy Of Sex sneaking up behind her with a surprise delivery.

‘Keep the load close to the body.’ Chortles M salaciously, as he reads the attached notes in a breathy phone-pest voice.
‘You lot are just disgusting.’ Concludes S flouncing off. ‘It’s not what they meant at all.’

‘That’s enough now.’ I chide, not wanting to risk further injury.
‘I don’t want anyone to feel uncomfortable.’

Give HR a good harrassment case and they'll forget all about issuing guidelines and policy for you SA!