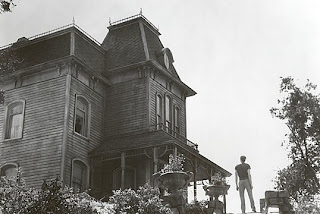 ‘Whoa, Goosebumps house.’ Says trainee F with a shiver, as we pull up outside the sort of decrepit property that gives me a hard-on.

‘What do you mean?’ I ask, twisting for my clipboard and feeling a sharp stabbing pain, hip-to toe.
‘It’s like a ghost mansion or something from the books.’
‘What books?’ I question grumpily. I was under the impression F read nothing more challenging than a betting slip most days, but the title is vaguely familiar.

‘By the famous author.’ F answers giving me the sort of look I normally send his way. I look back blankly, as an internal literary audit rejects Dickens, Bram Stoker, Mark Twain and Harper Lee.
‘You’ve never heard of him have you?’ Taunts F gleefully. ‘He wrote loads of bestsellers.’

Now I’m grumpy, the brief ardour the weathered house raised, draining away flaccidly. ‘Is this an adult author?’ I finally ask as I vaguely picture a gaudy collection of books my sons both had before they reached puberty.
‘No,’ Responds F indignantly. ‘These were like well scary. R. L Stine, he was, like, a genius or something.’ And it clicks.

‘They were a load of second-rate tat my kids used to read.’ I tell him scornfully. ‘I’m not even sure if he - or she - was a real person.’
‘They used to really scare me.’
‘And you read them all?’ I press, the unwelcome reminder that F is closer in reading age to my offspring, than me, not helping my mood.
F looks crestfallen before saying. ‘Not exactly read. I was more a fan of the television series.’

‘A book always paints a more vivid picture.’ I tell F sagely, as I tug on a rusting wrought iron gate and am rewarded with a suitably creaky noise.
‘How can it?’ Argues F, eyeing the peeling front door with suspicion as I wish I’d brought negotiator S with me. She wouldn’t be so easily spooked.

‘Because it awakens your imagination.’ I tell him wearily, realising I’m shoving water uphill again, but doggedly persisting. ‘And you don’t get commercial breaks.’
‘I used to hide behind the sofa.’ Says F with a bashful grin. And they still won’t demand a minimum standard of entry to the profession. God help us.

The door yields with a groan I vaguely recognise as the sort of noise I make rolling out of bed.
‘Do you think there might be ghosts?’ Asks F, wide-eyed and jittery.
‘The Boo Radley house.’ I tell him with a grin. He hesitates before asking uncertainly.
‘Like the band my Dad used to like?’
‘Which Dad was that?’ I snap unkindly, realising I may have awoken some genuine nightmares. My apology doesn’t clear the suddenly frosty atmosphere.

‘It’s freezing in here.’ F eventually says after the third dusty room has been inspected. All empty homes become chilly once they’ve been shut for a while, they start to smell too. And they move.
‘What the f**k was that?’ Yelps F in a girly voice. A deep groaning sound has emanated from somewhere upstairs.
‘The house breathing.’ I tell him obtusely, as another tip-tapping noise beats above our head.
‘And that?’ Squeaks F, close to panic.
‘Probably birds in the eaves.’ I say mysteriously, before adding. ‘Or a poltergeist.’

‘It’s warmer out here than inside.’ Shivers F as we stand in the overgrown garden and look back at the tired, but character-filled house.
‘That might have been a cold spot.’ I say mischievously. ‘An echo from a past occupant.’
‘Shit.’ Announces F. ‘They should just bulldoze the place. How many flats could they build on here?’

Too many, I think, as I mentally run the development options and try to recall the local plan. I’m pondering a loving refurbishment and some landscaping and you’d have a cracking family home. One I’d love to live in. With a secluded garden suitable for dotage pottering with plants. F is thinking affordable housing with maximum density and off-road parking for ten. No wonder our literary tastes don’t match.

Nothing in common bar the postcode.

It must be a bit of a horror/thriller for EA's at the mo with the way the markets going - I'm sure F would be the ideal cannon fodder in a Stephen King tale too!

Nothing wrong with a bit of Goosebumps, although I preferred the TV series 'Are you afraid of the dark?' for an extra edge!