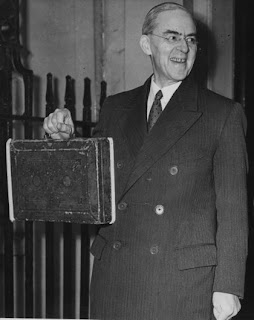 ‘What is that relic?’ Asks assistant manager T scornfully. Once I’ve quickly checked my flies aren’t open, I feel a little hurt. But then if an agent took every putdown and setback to heart he’d be having a by-pass operation before his first grey hair.

‘It’s a portable radio.’ I reply testily. The little battery-powered AM/FM unit has relayed over twenty budget speeches, whilst I’ve huddled up to the speaker anxious for some sort of fiscal fillip that might help me flog a few more homes. So far, it’s only ever delivered disappointment. Ill-thought out artificial stimuli that do more harm than good in the long run, meddling in market forces that have all the effectiveness of sandbags against a Tsunami, and another pompous prat who’ll be working in the City with an index-linked pension, by the time their asinine accounting skills are rumbled.

‘Why don’t you just follow it on-line?’ Asks T with a puzzled look. ‘This is traditional.’ I chip back. ‘Like the briefcase.’ ‘Didn’t they retire that?’ Asks negotiator S. She has a point. Two outstanding points, as it happens.

‘You should retire that thing too.’ Sneers mountainous mortgage man M, gesticulating towards my battered radio. ‘Get updates on your phone man.’ Man? Who does he think he is? Just because you consume the calories of an American teenager and have the waist size to match, doesn’t mean you have to sound like one. He’ll be calling me “Dude” next.

‘My phone doesn’t do updates.’ I finally offer defensively. ‘I think it might do.’ Suggests S tentatively. ‘I had that model three or four changes ago.’ Now I feel like a Luddite again. I can only just manage to upload property details on to the mainframe unaided, the digital camera seems to hate me with more vigour than an inanimate object should possess, and don’t even start me on laser tape measures.

‘It doesn’t matter what medium I use to learn the details.’ I say wearily. ‘The end result is always the same. Petrol up, alcohol and tobacco up, pensions plundered and property pilfered.’ ‘They wouldn’t put booze up again would they?’ Slurs loose lettings lush B from her desk. She can’t have been drinking this early in the day, so I’m guessing it’s a residual thing. That or she still has an unpleasant taste in her mouth.

‘What about Stamp Duty?’ Asks trainee F. ‘I’m not sure,’ I falter. ‘They might tinker with it but you end up with the law of unintended consequences coming in to play.’ F looks at me vacantly before saying. ‘No, I meant what is it for? What is Stamp Duty for?’

It’s probably the best question the imbecile has ever asked. M is there before me. ‘It’s just a tax on moving.’ He proclaims sourly. ‘It has nothing to do with housing and everything to do with maximizing revenue.’ ‘That doesn’t seem fair.’ Ventures F naively. He probably still believes in the tooth fairy and expects fuel tax and car licence costs to be spent on the roads.

Undeterred but none to hopeful either, I clear my desk, open my daybook to a fresh page and crouch before the wireless like some wartime patriarch listening for updates from the battlefront.

‘So that wasn’t too bad was it?’ Asks T when I emerge from my sanctuary. ‘Nothing on alcohol.’ Says B chirpily. ‘Still didn’t get the Stamp Duty thing.’ announces F. ‘How did people avoid it anyway?’ ‘Had to be a Muslim or a Russian Oligarch. Or both.’ Gripes M. ‘I don’t think you can say that.’ Ventures S hesitantly. You’ve got to love her.

‘Is that first time buyer scheme to bung £250million in the pot going to help?’ Asks T. ‘Might help builders get over the odds for unsold stock.’ Says M. ‘It’s a pain in the arse trying to explain a home with shared equity.’ You try valuing one, I think glumly, as S asks how it works.

Halfway through a stumbling explanation of part purchased, part rented from a Housing Association, I founder on stair-casing. ‘Is that a bit like tea-bagging?’ Asks F with a grubby grin.

I need a drink.

"So far...[budgets] only ever delivered disappointment. Ill-thought out artificial stimuli that do more harm than good in the long run, meddling in market forces that have all the effectiveness of sandbags against a Tsunami, and another pompous prat who’ll be working in the City with an index-linked pension, by the time their asinine accounting skills are rumbled."

The down forces are much stronger than this flimsy short-term vote winner.

This is the bigger deal, from the Telegraph:
"Hidden boost for house prices in the Budget"
http://blogs.telegraph.co.uk/finance/ianmcowie/100009899/hidden-boost-for-house-prices-in-the-budget/

it seems to be a great way of keeping an entire generation from owning a house and living under 2 months notice.

2 months' notice? I fail to understand why more tenants don;t insist on 2-3 year leases. We have.