Nothing But The Truth - Monday 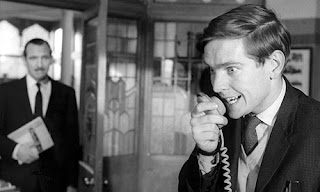 Out comes a new survey on the property market, to familiar groans of disbelief all round the office. I know information is supposed to be power but there’s the shit in shit out theory to consider.

‘How do they actually collate this rubbish?’ Asks assistant manager T, as close to anger as he gets, apart from that time he sat on his designer glasses. Head office didn’t consider it a company related damage incident, as I wasn’t prepared to put it in the office accident book. I’ve sunk pretty low over the years but inspecting T’s arse for signs of glass fragments so he can claim for a new pair of Fendi frames … well I just couldn’t see the point.

‘It’s asking prices, not selling.’ Informs negotiator S wisely. ‘Plus these idiots are so London-centric they probably think there’s nothing but council estates and static caravan parks outside the M25.’
‘You never been to Wolverhampton then?’ Asks obese mortgage man M with a jowly chuckle.
‘I was sent to Coventry once.’ Says idiot trainee F, seemingly without irony. ‘Does that count?’

‘I don’t know why people buy those Park Homes.’ Says T with a shake of his head.
‘Because that’s all they can afford?’ Chips back S with her socialist head on. She can keep the big tits but she really needs to lose the conscience.

‘Can’t get a proper mortgage on them.’ Offers M bluntly. ‘Made of not much more than cardboard, plus the losers who want them never take out life insurance.’
He’s a simple man with simple needs, most of them to be found in high calorie junk food.

‘What do you think?’ Asks S neutrally.
‘About the Park Home or the survey?’ I query.
‘Both.’
The phones are mute, the door hasn’t opened in nearly forty minutes and I can’t be arsed to look at the office profit and loss accounts, so I decide to share my knowledge again.

‘The trouble with a Park Home…’ I begin.
‘Is they are bought by failures who don’t have a proper job.’ Interjects M maliciously.
‘That’s….that’s…something-ist.’ Stumbles S, looking at me for support and adding uncertainly. ‘Isn’t it?’

M has some weight to his argument, but like all sweeping generalisations – and his stomach - it doesn’t bear close scrutiny.
‘It’s not a fair assumption.’ I finally tell S lamely, as M scoffs in my direction. ‘Often it’s all people can afford and if nobody will lend them the money it’s Hobson’s choice.
‘Are they the buyers with the Toyota Prius?’ Asks F vapidly. We stare at him bemused as I wonder, not for the first time, how anyone can make it through twelve years of education and still come out that stupid? Perhaps there’s an opening collating property data for him somewhere?

‘The Hobson’s,’ continues F haltingly. ‘Didn’t I take them to look at flats last week? Have they chosen something?’
‘Jesus,’ groans M, as he waddles away. ‘It’s no wonder you lot are at the bottom of the introducers' league.’
That’s not the reason, I think sourly, before returning to my faltering knowledge- sharing forum.

‘Park Homes are non-conventional construction, on a short lease with onerous conditions and owners tend to have second-class tenancy rights.’ I state authoritatively. ‘It’s why nobody wants to lend on them.’
‘Nobody wants to lend on anything.’ Interjects T glumly.
‘I can get you loans if you just give me better quality leads.’ Shouts M from the kitchen, divisively.

‘And this survey?’ Cajoles S sweetly.
‘They would be better listing selling prices, than asking prices,’ I tell her wearily. ‘But then nobody listens to me.’

‘Shite move.’ Announces T.
‘Buying a mobile home?’ Asks F warily.
‘No the website you numpty.’ Snaps T before stalking to the back of the office and checking the diary in vain.

My survey says it’s not as simple as that.

Asking prices are 25% above transaction prices. Who are the bigger idiots? The sellers or the EAs for accepting them, knowing they won't sell. Evidently, they hope they'll get them as sole instruction and grind the asking down. Yeah, over about 2 years, £5k at a time.

Also, is bullish news worse for sales than bearish, or does anything indicating a change in direction upset one side of the transaction?

PS - Is that the real Jonathan Davis (ex-HPC website spokesman) commenting? Just wondering as the language in some comments is not as professional as I'd expect.

Russell: Stability please. Bullish or bear, either seller or buyer gets twitchy.
S.A.