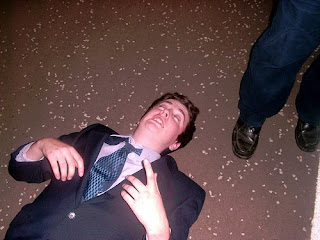 Hurrying down the high street towards a low-calorie lunchtime meal deal, I spy the hobbling banker moving painfully towards me. It’s a while since I’ve seen him and briefly, before he notices me, I consider crossing the road and concealing myself amongst the thin stream of joyless shoppers still trawling the sales for anything that isn’t in dwarf or giant sizes or a colour guaranteed to cause projectile vomiting. But he spots me and waves.

As he labours my way I wonder why he’s still moving like a man with a broomstick up his rear. The hip operation was some time ago, so maybe it went wrong? If it did he should be suing the NHS like everyone else does and finally finding a way out of the rat race. He’d just be another banker fleecing the taxpayer.

‘The other hip you say?’ I repeat incredulously, as he explains the mournful twelve months he’s just endured. I almost feel sorry for him until I remember his profession. One of the few times an estate agent gets to look down on anybody else. It’s shallow but gratifying.

He explains, as I surreptitiously look at my watch hoping my mobile phone will ring, that once you have one artificial hip, the remaining original one can start to fail.
‘A bummer.’ I tell him stomach rumbling, sympathy slim on the diet my wife has me on.
‘I’m wondering how much more fate is going to throw at me,’ he bemoans before adding. ‘Do you know, when I left school banking was considered a great job for life if you didn’t screw up.’

Yes, but you did screw up didn’t you? I yearn to say. You leant money at multiples people couldn’t afford, offered business loans to shitester property developers with no collateral and no morals, and only offered me Debenhams vouchers for the business I shovelled your way. That’s not right is it?

‘Now,’ continues the banker hitting a better stride than he managed on the pavement. ‘All the hierarchy want us to be is glorified salesman,’ he hesitates then looks sheepish and adds: ‘No offence mate.’ None taken, I think fleetingly, apart from the “mate” bit - I haven’t been glorified for some time.

‘Does everyone hate you too?’ Continues the gloomy moneylender seeking some sort of empathy I’m not ready to provide, particularly as my stomach thinks my throat has finally been cut. The chances are Boots will only have those threadbare wholemeal sandwiches with sweetcorn in them left, by the time the banker runs out of steam - or I push him over and duck into Next.

He’s not really to blame though. He’s just another low-level war criminal like me. Just someone following orders, trying to survive. The real culprits are counting their profits in an offshore account somewhere, where 50% income tax, 20% VAT and spiralling fuel costs don’t apply. God I wish I’d paid more attention at school.

‘Are you due back in to have the other hip done?’ I ask, trying to change the subject and find an exit strategy. ‘Not sure when,’ he sighs. ‘The cutbacks mean I’m no longer considered essential.’ Banking wise, or surgery wise? I almost ask, but he throws an unwanted question back at me. ‘How’s the market doing with you?’
Briefly I wonder if I should give him the official sanitised line, the one for vendors, buyers and press enquiries. The one the bean counter boss insists we parrot if pressed. But he’s an insider, so he’ll smell bullshit having been marinated in it for the last few years.

‘Shite you say?’ He repeats nodding in agreement. ‘I guess they just want you to sell insurance policies that won’t pay out too, do they?’ They certainly wouldn’t cover you, I think uncharitably, knowing accident sickness and redundancy policies don’t favour those who trip up, feel queasy or get the sack.

‘We are only allowed to lend to those who don’t need the money now.’ Confirms the banker mournfully. ‘I just hope I can hang on long enough to trigger my retirement pot.’

I head back to the office, the thought of my own pitiful pension having ruined my appetite.
Posted by secret agent at 6:41 PM

How about setting up the "what house prices will do in 2011" poll.

I'd like to know what you and your fans think.

Nothing like a bit of banker bashing before lunch