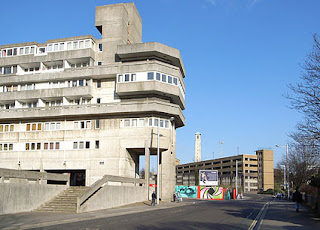 ‘You’re doing a viewing?’ Asks assistant manager T incredulously. I’m tempted to bite back and give him a pompous speech about all-inclusive management, about leading by example, about showing you still understand the roles your subordinates have to fill - but we both know I want to nip to the shops en-route and return some unwanted Christmas presents.

Thank the lord for M & S and gift receipts. Now there’s a company I should have worked for. I spent long enough in the lingerie department in December – but still got it wrong. It didn’t stop members of the public asking me for directions around the store. If you wear a suit and have a hint of authority, people assume you belong. It’s got me this far.

It also helped me dispense some timely foundation garment advice when one guy, even more confused than me, asked about the suitability of a red, up market hooker’s corset. They didn’t have his size as it happens.

‘Get something comfy with buttons this time.’ Chuckles B from her lettings enclave as she sees me take the telltale green bags out from under my desk.
‘Do you have the keys?’ Asks negotiator S neutrally and for a moment I think she’s heard about the handcuff misjudgement, but belatedly, as my cheeks colour match the fluffy restraints, I realise she’s referring to the less than uplifting Flat 32 C, in the grim ex local authority block I’m heading for.

Flimsy garments exchanged, knowing looks from the weary shop girl on returns, accepted stoically, I wait on the ugly elevated walkway, stained concrete monstrosity, rising above me like some lichen-streaked sentinel. This pile of linear-stacked lavatories is a harder sell than most, particularly as few lenders will even entertain offering a mortgage on the pre-cast coffins. I wouldn’t keep a dog there personally but we all have to start somewhere and I spot the young-ish couple approaching warily so search inside for a convincing smile I haven’t felt for a decade.

‘What’s the area like?’ Asks the man nervously as a thug on a skateboard, features concealed by a menacing Lord Of The Rings style hoodie, scoots by in a whistle of wheels and tinny base leaking from his earphones. Several answers - the honest one’s swiftly abandoned - swoop around my head, as the California dreamer leaps off some steps in the background and I fancy I hear a satisfyingly shattering sound as skateboard and rider part company painfully.

Up and coming seemed appropriate, until we’d stood in the whiffy communal entrance hall for several minutes waiting for the lift to descend, faint aroma of urine arriving in tandem with the doors drawing back. I was forced to back away, shielding my punters protectively, as an unshaven middle-aged man in a grubby vest and absurdly inappropriate three-quarter length trousers, exited the lift, vicious looking muzzled pug-like animal straining on a lead at his side, proving some people would indeed keep a dog here. Despite the lease dictating otherwise.


‘Is this the best we can get for our money?’ Asks the woman as we look from a moisture laden metal-framed window across the elevated concrete wasteland below, which probably won an architect’s award back in the swinging sixties. As I struggle for a reply I think I hear the faint rise and fall of an approaching ambulance siren. Think features and benefits urges the inner voice, dredging up some scant positives from another interminable training course run by a graduate with a 2.1 and no common sense.

As I feel the couple’s enthusiasm slipping away in chorus with a snarling domestic echoing through the flimsy party wall next door, I struggle for inspiration. Is proximity to a noisy pub with bouncers on the door at lunchtime a feature, or a benefit - or neither?

What about the fact that although Tesco are rumoured to no longer deliver groceries to the estate, you probably don’t need to leave the building for the majority of your class B and C drug needs?

‘Did they like it?’ Asks T when I return and I tell him it’s all they can afford, if fat mortgage man M can find a lender who’ll advance some funds.

It won’t be so easy to exchange next Christmas though.

Happy New Year, great blog. Would a comparable couple have been looking at similar places to live 15 or 20 years ago, or is it reflective of more recent times?

Russell - probably not as the local authority would still have owned this type of housing stock and private buyers would have started further up the 'ladder'.
S.A.

That's the block of flats outside Southampton trains station. Grim as grim can be. You get a feeling of Belorussia 1988.