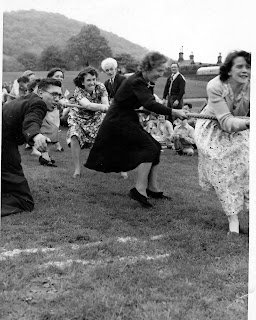 Three cars of varying vintages and values are crammed onto the drive, so I park in the road. The vehicles are at odds with the worn exterior, particularly the one motor with the personalised plates and the £100,000 plus price tag. Window frames are weathered and peeling, a leaking gutter drips mournfully and the front garden is a forest of overgrown shrubs. Old person dying alert.

‘You the agent?’ Questions the sour-looking late-middle-aged woman, who opens the door, a frosty atmosphere spilling from behind her like dry ice. Full marks for observance you stuffy cow, I think, pasting on a warm smile I’m not really feeling. I hand over a business card and she curtly asks for two more. Family inheritance dispute alert.

This is my brother.’ Confirms the ice queen disdainfully, waving towards a scruffily dressed guy of about forty-something, whom I’m guessing is driving the beat-up Ford. ’And this is the other one.’ She informs, pointing at a prissily dressed man with expensive spectacle frames, threads that look like designer label, probably driving the premium car outside. I console myself with the fact that you don’t have to like people to charge them 2.0% plus VAT and that Mr Big Shot’s car is dropping in value faster than the house.

Then I see the fourth occupant of the room. Slumped in a high-backed chair in the corner and chewing bovine-like on her dentures, is the aged mother they will be arguing over. Terrific, at least with a matrimonial it’s a fair fight – unless children are involved. These are just pure poison, a toxic mix of waning compassion to match the waning funds and grubby sibling squabbling over how best to use the cash.

‘Mum this is the estate agent.’ Shouts the scruffy son to raised eyebrows from the other two. Instantly I know who really cares and who just wants the money. A duo that knows the price of everything and the value of nothing - and a financially failed brother who probably grows vegetables and writes books nobody reads.

‘I’m not moving.’ Groans the old woman surprisingly forcefully.
‘That’s what she thinks.’ Whispers money-man, to his avaricious sister. She sneers at her other brother as he wipes something dribbly away from his mother’s chin. God, I think, you see people at their worst where property is concerned. Fleetingly I wonder if I can get away with 2.5%?

Superficial tour around the dated home with the haughty daughter as shotgun - no ring on the finger unsurprisingly - I’m back in the lounge. The house has been as expected. Run down décor, faded wallpaper, museum piece kitchen and bathrooms that if you wait long enough will come back into fashion. I know what it’s worth, but I’m betting we won’t agree.

‘She needs to go into a nursing home.’ Announces the daughter with an air of finality the unsuccessful son clearly doesn’t agree with, judging by the way he’s shaking his head in unison with the mother. The old stick is either more alert than anyone thinks, or her nodding synchronicity is just a coincidence.
‘Of course we want the best for her,’ Interjects personalised plate man unconvincingly. ‘But have you any idea how much these old people’s places cost?’

About £880 - £1,000 a week I think, but as it’s a rhetorical question I steel myself for the argument on price. With about as much enthusiasm as I can muster - as I look at the faded photos on the mantelpiece, one’s filled with hope and expectation - I give them the truth. City man laughs dismissively. His sister gives me the sort of look that could fast-freeze food produce and the writer just looks dejected.

‘We can’t possibly sell for that.’ Spits money-man eventually. ‘We’d run put of money if…..’ And he tails off tellingly.
‘If she lives too long?’ Shouts his brother.
‘I’m still alive, and it’s still my house.’ Croaks the mother gamely and I’m reminded of an old Monty Python sketch where they bring out reluctant, not quite yet dead relatives, to the guy pushing the plague cart – or estate agent, as I like to call him.

Like the mother, I’m staggering on reluctantly.
Posted by secret agent at 6:53 AM

Bit apposite for me at the moment really. The question is the 'when to move?' - too early and the risk is leaving one's home when it's not really needed. Too late and one loses the ability to make the decision for oneself.

I hope the estate agent when he finally comes round doesn't think the same of me and my two brothers. We're more likely to try and get the old dear staying in her home too long (and not for financial reasons I hasten to add). He'll probably think we don't care. Can't win really.

Good observations though as ever.

Window frames not widow frames in first paragraph, apart from that - truly excellent. I am currently going through putting my father into care and it is a lose-lose situation. You remind me a lot of Jack Dee, and that's a compliment.