Survival Of The Fittest - Monday 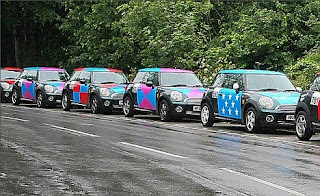 Turn up the requisite five minutes early for my next valuation to scope and prepare. After finding a parking slot, I notice the corporate car of one of our competitors. A muttered expletive hits my spittle-spattered headlining. You expect punters to have several valuations, or market appraisals as the nervous players insist on calling them, but I’d rather the coffee cup and the sofa seat was cold by the time I arrive.

Scowling, I direct my ire at the logo-encrusted Mini. A rasher man might sneak up and let the tyres down, or add a witty addendum to the bodywork slogan with a permanent marker pen. As it is I just sit and stew.

My local knowledge, something I prize and the public value at zero, tells me the boy or girl inside will be pump-priming the price to unrealistic levels just to win the instruction. Then endeavouring to button-down a lengthy sole agency to shut me out and control the marketing – and the inevitable future price reductions. It stinks.

The door opens and out he comes. He’s slimmer, younger and has more hair than me. His eyesight is better too, it seems, as he spots me and gives a sarcastic wave as I clamber stiffly from the motor.

‘Still going then?’ He drawls sarcastically. ‘I’d have thought you’d retired by now.’
‘Some people value experience over loud ties and empty promises.’ I counter aggressively. For a moment I think the youth is going to thump me, his eyes bright with anger. I’m imagining how hard I’ll hit the pavement and almost wistfully wondering if I can sustain enough damage to have a few months off, without being left on a ventilator. But he spits an empty threat at then slides towards his car, as if on castors.

‘How much?’ Questions the mid-thirties man incredulously, twenty minutes later. His partner – they’re rarely married any more - gives me a look she might well reserve for someone who gooses her on the underground.
‘We couldn’t possibly sell it for that much.’ Gripes the man.
‘We’d be giving it away.’ Chips in his lady.
I’m wasting my time.

‘The other guy offered us way more than that.’ Goads the female, clearly misunderstanding the whole process, unless the slimeball in the suit was going to buy the pad himself at twenty grand more than it’s worth. Of course he wasn’t, that sort of weasel only ever buys under the odds. Usually on an absent beneficiary’s estate that nobody else gets to view.

Half-heartedly, I give my pitch about a realistic price being better for them in the long run. How they can sell at a fair figure and buy at a sensible one too. It’s about the changeover number, I tell them persevering against all the negative sales signs flowing my way. I might as well be trying to convince a pair of Palestinians their new Jewish neighbour will be great company once he’s finished building in their garden.

I’m too long in the tooth for this, I think, as I leave my presentation pack and business card. It’ll be in the recycling bin before I’m in second gear. I know people don’t want total honesty on price. I’ve known it for years, but still I try to treat them fairly. Try to not mislead them. Refuse to give them fools gold figures to work on.

‘You’re too old fashioned.’ I say to the rear view mirror. The talking to myself a worrying trend. I still haven’t succumbed to a BlackBerry, resolutely sport a basic Nokia and prefer to measure-up properties with a tape not a laser. I can’t even work out half the functions on the iPod nano my wife gave me for my birthday. Old dog and new tricks, I think morosely, as another recently registered car turns up.

The immaculate young woman, in tight skirt, crisp blouse and high heels who unfurls seductively, is certainly no dog. Any tricks she has will probably be high value one’s turned in a Mayfair hotel, I think absurdly.

I watch as she rings the doorbell, then slips inside with gamine grace. Looks like I’m screwed again.
Posted by secret agent at 8:07 PM

Pity the poor homeowners, most of whom buy and sell only a couple of times in their lives and know nothing about the tricks and schemes of all the shysters in the industry.
I learned a lot by going through the process, but still fell for the high valuation trick (although not with the wanker from Foxtons).
Unfortunately for my local agents, I learned so much from the process that I now wouldn't use any of the scumbags and would do the whole process myself (conveyancing included).
The trustworthy old-timer is due for a come-back, but I have no idea how it might happen.

i am sale a property in india .many more location sale property .
i found u site is very cool.all details in website.

Surely you can make a decent living from referrals of past clients ?

Sadly anonymous, past client referrals, no matter how welcome are not enough to hit the targets we need to meet.

I really can't believe people still fall for the overvaluing trick, you would think people had more sense than that in this day and age. Look around you at houses for sale, what are they on for and are they selling, then you can make a judgement on the value of your own property.