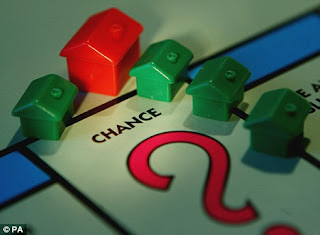 I have an intrinsic opposition to surveys, as they impact on my working life out of all proportion to the data and its reliability. For that reason I rail against the census every ten years and the intrusive leading questions posed. I dodge those middle-aged women in the high street with clipboards, too much lipstick and too much time on their hands. And I hate with a passion, property surveys.

‘Yes, asking prices.’ I mimic sarcastically. ‘Any fool can ask anything they like and there’ll be plenty of inexperienced agents with instruction targets who’ll happily stick them in the window.’ I could have made the same disgruntled speech ten, or even twenty years ago. Nothing changes except the advertising medium.

‘He says here the rise takes some explaining.’ Continues T eyebrows raised as he quotes the media spokesman for the organisation responsible for the most pointless set of data ever – until the next one.
‘Doesn’t take any explaining at all.’ Posits negotiator S with a shake of her pretty head. ‘Just greedy vendors, idiotic agents and a blind refusal to accept reality.’

‘It doesn’t help us though does it?’ Says imbecilic trainee F to a long echoing silence. One-by-one heads tilt in amazed recognition that he’s actually uttered something that makes sense – until he spoils it by adding. ‘Does that have mean we’ll have to change all our asking prices too?
God, I thought the state schooling system was bad enough – witness the barely literate mother-prodded idiots who stumble in and think they’d like to be estate agents This clown’s parents paid a minor public school for the privilege of turning out a tool in a tie with as much common sense as a pond amphibian.

‘Apparently bullish pricing is normal at this time of year.’ Continues T in a mocking imitation of an in-bred yuppie that has never been near a leaflet drop on a wet Wednesday - or a divorcee with no husband, no income and no buyer. ‘It’s a habit that’s hard to kick.’ Concludes T finishing the press release just as lettings lush B trips through the door reeking of alcohol and disappointment.

‘Mr Cameron on line two for you.’ Announces S later, with a suppressed giggle. We both know it’s not that one, the joke a little old now since I listed the house a full ten weeks ago. The viewings have been sporadic and disappointing in outcome. I’ve been steeling myself to ring him to try for a price cut before the agency agreement runs out, just as I would counsel T to do on his over-priced instructions. But knowing what you should do - even telling someone what they should do - is a lot easier than actually doing it yourself.

‘Mr Cameron.’ I bluster, trying to project that ethereal mix of professionalism and confidence. ‘How are you today?’ It’s a stupid question, one I should know better than to ask, so when he answers: ‘Not happy.’ It comes as no surprise.

‘I’ve been thinking about our finances.’ Continues Mr Cameron, as I begin to think maybe he does has something in common with the Prime Minister, until he adds: ‘I’ve seen this survey in the newspaper.’

‘You want to change the price?’ I repeat woodenly. ‘Yes,’ continues Mr Cameron blithely. ‘I think we should increase it.’ I should be stunned, but I’ve heard this one before. ‘We’re attracting the wrong type of buyer at the moment.’ Concludes Mr C with wildly misplaced certainty.

The wrong type of buyer? I mock, once the phone is back in its cradle but still rocking dangerously. And what exactly are they? One who wants value for money? One who wants to avoid negative equity and an early repossession? One who’d like to pay off the loan before the care home fees kick-in?

My survey says Mr Cameron is going to be disappointed.
Posted by secret agent at 5:43 AM

Stunning! Having seen the odd price go up even when a house has been on the market for ages still makes me giggle!

How many people are aware of property bee? It makes for amusing reading sometimes!

Excellent writing as always. I love the way sellers are so arrogant about buyers - handily forgetting they tend to be both ...

Thanks for your blog SA, I've not been here for some time but Mrs. Sticky is taking me house-hunting on Tuesday, so I thought I'd get back up to speed with the way things 'work' in the house flogging industry.
Any advice for a FTB?

Understand that Mrs Sticky will choose the property, arrange a mortgage in advance and buy for somewhere to live - not a short-term investment.
S.A.

Hello estate agents! I am just about to get a re-mortgage slightly larger than I would like and buy a repossessed 5 bed detached house in Wokingham, Berkshire. Am I mad?

Read that about asking prices going up too, simply means less completions until prices come back to where they should be. Nobody gains from this.

Does this mean there is hope for the property market in the near future? I hope so.