Let It Be - Tuesday 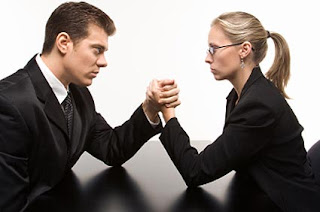 ‘Where the hell is she then?’ I grumble, frantically checking my watch against the office clock like some anxious groom at the altar.
I’m booked for an early morning joint-valuation appointment with lettings lush B. As soon as I saw it in the diary I knew it was a mistake, B either still under a table or under a bloke, most dawns.

‘Perhaps she’s ill?’ Suggests negotiator S naively.
‘Nothing trivial I hope.’ I snipe back gracelessly. My experience of staff ringing in sick tends to border on clinically cynical. I’ve yet to have one limp in the next day minus a limb, but then there’s always a first time.

A joint-valuation with another staff member, and more importantly another discipline, is a double-edged sword. I’ll want the owner to sell their property and B – if she turns up – will be trying to convince them renting is the better option. The only consolation is we stop the other agents from getting the business. At least we have a chance to, if we actually attend.

‘Here she comes.’ Announces assistant manager T after another testy ten minutes, just as I’m starting to foam at the mouth. Sure enough the wine-washed tart stumbles across the road to a chorus of angry car horns. She rewards the drivers with a flick of her hair and what she presumably judges to be a seductive look, but I just find frightening.

‘Is she still pissed?’ Asks trainee F with uncharacteristic insight.
‘Almost certainly.’ I reply, as she stumbles through the door, lipstick visibly smudged now she’s up close, blouse almost certainly the same one she had on yesterday.
‘I’ll drive.’ I announce curtly. ‘Get your stuff.’
‘Looks like you’ve pulled.’ Chortles S unhelpfully, as I stomp towards the car park, B a few yards behind tottering on a combination of three-inch heels and three-sheets-to-the-wind.

‘We’re going to be late. I hate being late.’ I spit towards the headlining.
‘Me too.’ Mutters B. I’m left to ponder if she’s had another pregnancy scare – God forbid – or she’s being ironic. Moodily, I drop the window and a wash of cold air flushes the combination of sickly perfume and stale alcohol from the car. It’s not going well.

‘I want this one.’ I announce as we pull up outside a pretty detached Edwardian house in the better part of town. ‘So do I.’ Bats back B belligerently. ‘I’ve got tenants who’d do anything for something like this.’
Not anything, I think uncharitably as I reach into the back seat for my brief case and get a stab of pain down my leg as a reward.

B gathers her presentation pack and hitches her skirt up conspicuously, as I hope it’s a woman who opens the door - at least a heterosexual one. B stumbles again as she negotiates the step to the door and my heart sinks to subterranean levels.
‘I’m alright.’ She snaps as I move to take her arm. ‘I’ve had enough grabby men for one day.’

‘That went rather well.’ I crow, as we clamber back into the car forty minutes later. B just scowls at me, as I pack away the sole agency form with a theatrical flourish. Her mumbled entreaties to the owners for a six-month fully managed tenancy agreement while they worked away, was comprehensively trumped by my early day marketing plan – God bless the demise of Home Information Packs – and the lure of buyers waiting.

‘You don’t like me very much do you?’ B fishes icily.
‘I wouldn’t say that.’ I respond eyes fixed on the road. I have actually, but that’s for me to know - and her not to find out.
B goes very quiet as I negotiate the traffic, just a dull semi-sobbing sound emanating from her direction, one that I dare not turn my head to look at.

‘You’ve really pissed her off.’ Confirms T at lunchtime as B stomps out in the direction of the pub.
‘It’s business that’s all.’ I say neutrally. ‘We can’t both do the deal. At least we’ve kept it in house.’

Apparently I’m the biggest prick B knows. I doubt that somehow.
Posted by secret agent at 9:57 PM

"pretty detached Edwardian house in the better part of town" & sole agency at that. I'm very much afraid that you must have done something right.

Always great to win a contest, even in house. At the end of the day the only one that looks after your own interests is yourself.