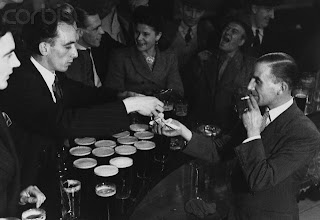 ‘Bean counter’s bitch on line two.’ Announces assistant manager T and I look up at my office clock in amazement. Somehow while I’ve been poring over the statistics an hour and half has vanished from my life - never to return.

‘I don’t suppose we’ve had a call from Peterson’s solicitor have we?’ I ask more in hope than expectation. At this time of the afternoon our vendor’s legal representative is probably in the pub, or in his secretary. Either way the chance of me having an exchange of contracts to bolster my figures for the week are slimmer than an anorexic’s waistband.

‘Not a thing.’ Confirms T tetchily. ‘I left two messages but he’ll be long gone by now.’
One of the rules of estate agency is solicitors rarely call you back, far too important. The only way you can correct this imbalance is to send naive un-represented clients their way. And even that is frowned upon by the head office number-crunchers, as they want you to use crappy corporate conveyancing farms staffed by robots with a script sheet. Still there’s a centralised kickback on the fee to make up for the poor service. I ignore them and my figures suffer.

‘So do you want me to fob her off?’ Questions T referring to my boss’s secretary. It’s not a wise thing to do. She may be an arid old battleaxe with all the humour of a melanoma, but I need to keep her onside. She’s far too wily to accept T’s limp excuse that I’m on the other line.

‘How are you?’ I gush, the words sticking in my throat like lumpy porridge. ‘And how are those grandchildren of yours?’ It’s a crude diversionary ploy but always works. I’m only delaying the inevitable but you still need to cultivate relationships you’d rather not have. And forsake one’s you’d like to, I think ruefully, as negotiator S bounces past my office window alluringly.

Brief interlude about snotty runts and their school adventures later and she presses for my weekly figures, adding the bean counter is in a grouchy mood so could I make them good. I’d love to make them good, not least because I’m on commission, but sadly the salesman’s lot is to be endlessly disappointed. Even the few times a year when a week gels and no sales fall-through there’s always a deal that got away. Always something that could have gone better.

‘Oh dear.’ Chides bean counter’s secretary unnecessarily. ‘He won’t be too pleased with that, we’re having a terrible week so far.’ I’m pretty sure her cosy salary will remain unaffected, but decide withering sarcasm is best kept secret. ‘Did you want to talk to him,’ she questions. ‘Explain what went wrong?’

What went wrong? I ache to mock. What went wrong was the pissing public and their inability to keep the most basic promise. What went wrong was a brace of pedantic surveyors frightened of their own shadows and intent on down-valuing every property they see just to avoid getting sued at a later date. What went wrong was a tosser saying my word is my bond two days before pulling out of a deal and costing me four grand. What went wrong were lawyers sitting on their arses and their files while chains break, deadlines pass and matrimonial disputes escalate.
‘How did he take it?’ Questions T as I return to the main office and I sheepishly admit I ducked the confrontation. I’ll wait for the memo.
‘Coming to the pub?’ He continues. It’s a half-hearted invitation and certainly doesn’t include T buying me a beer, quite the contrary.

The salesman’s career, like a politician’s, is doomed to end in failure. Perpetual targets leech the life out of you like so much spilt blood in the sand. The glittering prize of bonuses and recognition, have you restlessly searching for something more - car, house, wife. Life. Like some deluded treasure hunter you forage across barren land with just the occasional soaring hope that usually turns out to be fool’s gold, or a rusting horseshoe.

A few beers can solve all life's problems I find!

"The salesman’s career, like a politician’s, is doomed to end in failure. Perpetual targets leech the life out of you like so much spilt blood in the sand. The glittering prize of bonuses and recognition, have you restlessly searching for something more - car, house, wife. Life. Like some deluded treasure hunter you forage across barren land with just the occasional soaring hope that usually turns out to be fool’s gold, or a rusting horseshoe."

If this is your own- it's brilliant, inspired. I like, and have stolen.