Hapy Ever After - Saturday 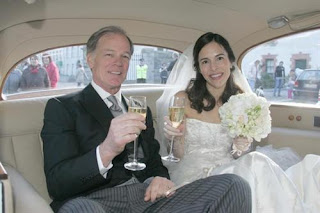 To a city wedding with all the attendant anxiety - my wife over dress choices, mine over mixing with a bunch of high-end income hoorays who’ll be quizzing me on my profession under the guise of small talk.

On my own territory I can mix-it with these braying over-privileged prats. I have the inherent control designated to the estate agent when the owner cedes marketing to you. If I have a key even better. I can feign a plummy accent, talk superficially about bonds and balance of payment deficits, and if it all gets too detailed invent another appointment as an escape route. Here there are three unknown hymns to mime and interminable photos with people you’d rather not be seen with.

‘Cheer up.’ Hisses my wife as I exchange pleasantries with another chinless wonder and he actually looses interest before I do. The one thing guaranteed to make a nascent misanthrope even grumpier is a breezy exaltation to enjoy yourself when you’d rather be ramming bamboo splints under your fingernails – or at least somebody else’s. There are plenty of candidates to choose from.

‘We haven’t been to a wedding for ages.’ Trills my wife, eyeing a couple of women warily as they totter by on tower block heels. One she hates immediately for her label and her figure, the other she probably favours, as she’s at least a dress size bigger than herself.

Of course there are two reasons we don’t do too many nuptials any longer. One, I don’t get invited and two we’re at an age, with kids yet to commit to wedlock, where funerals are more likely to figure heavily in the diary. At least the dead don’t want artfully posed snaps with every attendee. In the absence of an unlikely resurrection, you can just crack-on with the sandwiches and the will.

‘Here comes another one.’ I whisper to my wife, pasting on my dealing smile and taking a vast slug of champagne before swiping another glass from a passing waiter.
‘And you must be….’ Begins the ruddy-faced six-figure bonus boy, trophy girlfriend following two steps behind, no veil, but subservient on every level. In the wrong place at the wrong time? I yearn to say, but my wife’s vice-like grip on my arm gets tighter still and I feel the first bruise rising. I cough reluctantly. Profession too.

‘So what’s the market going to do?’ Asks the man earnestly. He’s royally pissed, somehow he’s managed to trough more free bubbly than me. ‘Only I’m thinking of investing a couple of million on a pied-a-terre.’
‘You won’t get much for that around here.’ I say maliciously. I’m rewarded with a look of disappointment from the banker, one of petulance from his girlfriend and a Chinese burn from my wife. You have to suffer for art.

‘He was only looking for some advice.’ Chides my wife after the potential property investor retires prematurely.
‘Yeh free advice.’ I carp.
‘You could have given him some tips.’
‘How about a pre-nup?’ I ask, as the groom walks by, newly acquired wife clinging limpet-like to his arm, and I give a wan smile. I’m not sure he even recognises me. I’m somewhere around the third page on the photographers list, if he wants to check.

‘Don’t drink any more.’ Warns my wife as I slug back more fizz and a rush of bubbles threaten to regurgitate via my nasal canal. Then another man with a suit that probably cost more than our family holiday zigzags my way. The familiar feeling of inferiority a damaged childhood and a truncated education fosters, rises in my gullet faster than the suddenly sour Moet. I’ve more baggage than the bride will be taking on honeymoon.

‘So you’re the agent!’ He bellows accusingly, in the sort of tone one might use when outing a child-molester. ‘I need your best guestimate on what the London market will do in the next twelve.’ And before I can fabricate a response, he adds. ‘Word is we’re in for another tumble.’

‘Why did you ask if he was the wine waiter?’ My wife demands angrily.
‘It’s a defence mechanism.’ I plead weakly. ‘Plus I’m not sure what the answer is.’

The only certainty is - I’m definitely falling.
Posted by secret agent at 7:42 AM

Hate weddings myself, especially inlaw ones. Have one coming up in October and have still to work out what ailment I have to get out of it!