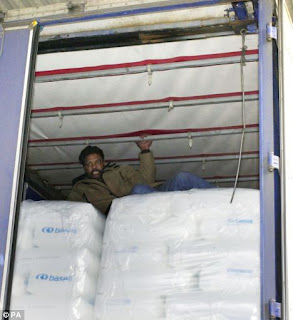 I’m still slightly disorientated from the holiday. It’s obviously not jetlag; you need to jump more than just a one-hour time zone to plead that excuse. The only real time loss I suffered was trying to hold on to the contents of my bowels, wishing away the minutes, without having to rush to the aircraft toilet and hurriedly evacuate. That’s something they don’t demonstrate in the safety feature. It brought a whole new dimension to being on a Dash 8, as I fought against the shame of leaving behind something more liquidy - and twice as explosive - than the drink I had to ditch at security.

‘You alright boss?’ Asks assistant manager T perceptively. I’m staring at the computer screen glumly, my guts are still fluttering like a moth in a light, and the draft profit and loss accounts have just arrived on my desk.
‘I’m fine.’ I lie. ‘Just a little tired and trying to get up to speed.’
‘That’s the trouble with holidays.’ Says T sagely – suddenly he’s the office oracle. ‘So much changes in a week or two that you feel like the new boy every time you come back.’

T’s right, I think, as he disengages faster than the autopilot when we hit that turbulence – internal and external – and I’m left with the blur of figures on the balance sheet. If I’d wanted to be a bloody accountant I’d have locked myself in my room for several years, developed acne and body odour, and had a personality by-pass. All of which seems to have worked out rather well for my bean counter boss. The meek may not inherit the earth but a zit-scarred geek with personal hygiene issues apparently will.

Every year it becomes harder, something about the drip-drip erosion of confidence and energy that comes with sales and targets. With the abolition of the absurd waste of time and effort the Home Information Pack fiasco turned out to be and with the market foundering under the combined weight of expectation and parsimonious lenders, more new instructions have appeared than normal.

I scan the details of the homes T has listed in my absence. I ought to be pleased as stock is usually hard to come by, but a manager is never happy. My lot fluctuates between not enough properties on the books, to not enough buyers to keep twitchy vendors happy. The register is climbing and purchasers are dwindling. Yet I still can’t second-guess the market, even after all this time.

‘What the f**k?’ Groans T mid-morning as he gazes at his flatscreen. ‘Why do they publish this stuff?’
As I hobble across the office, leg still throbbing from the flight, a fleeting thought involving a deep-vein thrombosis and an unlikely way out of this purgatory crosses my mind before I too let an expletive slip.

Another journalist with a dead brain and a deadline has issued some London-centric pap about the market. Sometimes I wonder if these keyboard jockeys have ever travelled outside Zone 1 on the Underground. Unless you are some braying, top-pocket handkerchief wearing twat from one of the high-end agencies, rampant price rises and multiple bidders with beneficial exchange rates in their favour and a drug cartel with a laundry list driving their relocation decision, are a figment of a journalist’s imagination.

Directly below the drivel about double digit percentage price rises in favoured boroughs, is a contradictory piece asking if the market is on course for another crash?

‘So are we heading for the rocks or not?’ Asks trainee F craning to look at T’s screen, vapid look etched across his face. Some would say we’ve been beached for weeks, certainly the bean counter has been telling me that every Friday when the stats are published. Truth is nobody really knows - at least not until several months after the event.

I catch my reflection in T’s screen. Momentarily I think it’s F - albeit a more haggard version. I have the confused look seen on an illegal immigrant’s face when the container door is opened and he realises Dover is as big a shit-hole as the fly-blown village he left.

So is the market sickening, or is it just me feeling bilious?
Posted by secret agent at 10:06 PM

Aberdeen is not doing bad.
Real issue is % down for many buyers right now.

As estate agents in Aberdeenwe see people failing the credit scores regularly now.
To top it off our web builder deleted our site and place a template up,and has lost our original site.!