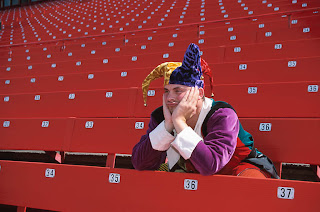 The office splits more or less on gender lines, over whether we should try and watch the world cup football during working hours. Rival manager, small of stature big of head H, has already told me he’ll be taking himself and his two arrogant negotiators to the local pub to catch the action – such as it is – on the giant screen.

‘Leave the women in the office to hold the fort.’ He informed me in a cocksure, but to me odious tone. ‘Whatever they screw-up can wait until the A Team return.’
H constitutes, in one little poisonous package, all that is wrong with estate agency, with his dubious methods, appropriately named short cuts and blatant misogyny.

‘You call yourselves the A Team?’ I ask incredulously, too flummoxed not to bite. And he reels off a bastardised version of the old eighties television programme’s catchphrase, ending the self-aggrandising statement with the claim that they are the property sales saviours who’ll bail out the company – if you can find them.

‘Where will you be watching it?’ Quizzes H and he senses my slight hesitation like any finely tuned salesman would. ‘Oh don’t tell me you’re playing by the rules again?’ He mocks, citing the bean counter boss’s officious memo warning staff not to show overt support for the England team.

It’s true I’m torn. Firstly over the ethical side of the sport lovers leaving the remaining staff to fill the gaps and secondly over watching a bunch of overpaid show ponies failing miserably to meet a nations’ expectations, lofty or otherwise. The last two games I suffered were almost as uninspiring and turgid as one of the bean counter’s sales meetings. Leaving those involved, passive or active, thoroughly demoralised and ready to reach for your preferred painkiller as soon as possible.

‘We want shopping time in return.’ Demands lettings lush B as she hands me the keys and I pocket them with a feeling of red-faced guilt. Negotiator S nods in agreement, and trainee F just nods all the time. He’s more of an oval ball man he informed the assembly as we negotiated participants. Nobody had the energy, or desire, to enquire further.

‘You know they’ll end up disappointing don’t you?’ States S rhetorically as the three of us make to leave furtively.
‘All men do.’ Chimes B with a stern look that just dares any one of us to disagree. I’m pretty sure the statement is about as sexist as H’s earlier one, but as I’m a man and as the flat is on her register, I’m not in a position to argue.

As my car crabs through the traffic, seemingly slightly lop-sided with fat mortgage man M in the front seat, and assistant manager sitting behind polishing his glasses with ill-placed anticipation, I still wonder if I’m doing the right thing. Shrugging, as I realise it’s a dilemma I have every morning, I press on as we head for the subject property.

We pass a row of St George’s flags, hanging limply from upstairs windows in the unaccustomed sunshine, and then several cars sweep by in the opposite direction all sporting fluttering plastic versions of the aforementioned banners. I can’t help wondering how soon the symbols will be torn down, as like a year in sales, expectations don’t match reality.

Car safely hidden in the underground parking bay, the three of us make the internal lift. I’d tell you where we were but I’m a stickler for client confidentiality - and estate agents have their reputation to protect.

‘I have a really good feeling about this.’ Salivates M, his fat paw clutching the family sized bag of Kettle Chips he felt necessary to bring along in the absence of alcohol. I’m often in the wrong place at the wrong time, but I still do my drinking after hours.
‘Yep, we can’t get any worse.’ Agrees T. ‘ We’re definitely on the upward curve.’ I glance at the maximum payload sign on the lift wall and wonder if M’s kerb-weight will take us over the six-person limit, and that sinking feeling returns.

‘Just don’t damage anything.’ I fuss as the giant flat screen illuminates and those incessant vuvuzela’s start to sound.

Hmmmm. Not sure I'd be happy if it were my property. Admittedly not quite in the league of the agent recently convicted of stealing from clients' properties, but even so ...