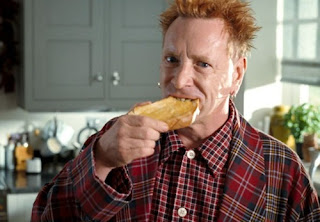 As I drive to work, the few flags and runs of bunting remaining are being taken down faster than lettings lush B’s morals drop on a night out. Once again England’s football team inflict nothing but disappointment. For those not in sales it’s a little four-yearly glimpse into the life of targets, inflated expectations and ultimate failure. The pain is cumulative, and I’ve been suffering for decades.

‘Who wrote the scrip for that f***ing fiasco?’ Demands mortgage man M as he balloons through the door clutching a comfort blanket bag of supermarket doughnuts. I could have done, I think morosely, before uttering a banal platitude, the like of which a football manger might offer ahead of the inevitable pay-off.

In the absence of that trip to the guitar shop and the tricky matter of several years study to master a basic pentatonic scale, I write as a catharsis. I dream that maybe it might provide an escape route from flogging homes for ungrateful punters, but unfortunately my two neglected loves of music and literature seem to have become unsustainable economic models, just when my interest reawakened.

‘I’m not watching those bunch of overpaid prancers ever again.’ Bemoans assistant manager T as he joins the downbeat discussion and the post-mortem begins. Half way through an eleven-man character assassination, an early applicant comes through the door. Once T has garnered his details, established he can’t afford anything and that even M has nothing to pick over save some pet insurance, the thwarted buyer starts to lambaste our feckless footballers.

‘Seems to me they should spend some time in the real world.’ Ponders the guy as he pauses on the threshold and casts a lustful look towards our Fine Homes display, unless he’s ogling negotiator S, whose blouse and bra ensemble is doing its best to lift the whole maudlin atmosphere. ‘We can’t live on the money we make,’ concludes the man grimly. ‘And certainly can’t afford anywhere to buy.’

‘Another time-waster?’ Queries M as he waddles back from the kitchen, trail of sugar down his lapel. T answers in the affirmative and they both exchange a familiar dialogue about people’s pockets not matching their aspirations - about unfulfilled dreams.

A guilty, almost sadistic pleasure, in knowing how the failed footballers ought to be feeling only sustains me about as long as a jam-filled dough-ball sates M. For some cruel-fate reason I’ve decided, after half a lifetime of far-off targets, to try and master a new perplexing skill with just O-level English and blind stubbornness to guide me.

A blizzard of rejection slips from commissioning editors are not greatly different from the weekly opprobrium the bean counter sends my way, when he reads my stats rather then my prose. Apparently focus groups belief there isn’t a demand or desire to pay for tips and anecdotes about the moving process. Yet still people watch that pap about property on the box.

Now if I were a woman and could write soppy sentiment about shopping, chardonnay and failed relationships, a three-book deal could be mine. As a man the stay at home dad genre, where you ramble about the trials of some wimp mastering the washing machine and taking his toddlers to playgroup is saturated. Just as well, the losers should get a real job and support their wife and children. Either way, unless you know some media popsy and have a double first from Oxbridge, or are a vacuous minor celebrity with a ghost writer, there’s no market for the ramblings of an ex-punk who can’t even be bothered to get angry any more - some days.

‘Bean counter for you on line three.’ Announces T with a note of apology in his voice. It’s a safer bet, than a punt on an England win, he’s not ringing to offer me the sort of redundancy pay-off departing managers of a different profession are given.

‘What were the scores at the weekend?’ He demands, cursory pleasantries by-passed gracelessly. Momentarily I’m thrown, until I realise he has no interest in sport, other than the blood variety that involves more dogged hounding than the now neutered hunts do.

Does this mean we'll not be seeing the book some time soon?

It's written and ready, failing an adventurous publisher I'll self-publish for the autumn. The more people who register their interest on the e-mail form to the side of the Blog, the more confident I'll feel in going ahead.
The industry experts like the material, they just figure the demand won't be great enough. Time will tell!
S.A.

Charge that to experience. Everyday is a learning experience. By the way, If you think it's time to have your own place in Nottingham, why not try this great option of rent to own homes. Good luck in everything!