Working For The Clampdown - Thursday 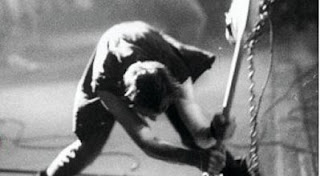 The bean counter boss rings to practice management by moaning. I suspect the only time he’s hands-on is when he’s alone with some tissues.

The whining voice drips-on about key ratios and revenue streams as I imagine sneaking up behind him with some piano wire.
‘The key performance indicators need some attention.’ He pontificates, as I think sell some more houses then?
‘You should revisit the SWOT acronym.’ Advises the figure-fiddler nasally, and instead of analysing strengths, weaknesses, opportunities and threats, I major on the threat aspect. As I imagine an armour-clad band of balaclava-wearing assassins, each bearing a remarkable resemblance to me, sneaking up on the accountant and drawing a permanent line under his life graph.

‘There’s no room for old-fashioned estate agency in today’s market.’ He concludes erroneously. I want to highlight to him all the successful independent agents making money doing just that, but it would only serve to underline his carping about my figures. Instead I just fantasise about an ever-tightening garrotte and the surprised look on the bean counter’s face when he realises just who is the choker now, momentarily before he passes out.

‘What did the number-cruncher want?’ Asks assistant manager T when I return to the main office, phone call over, assurances of improvement given - covert killer skills untried.
‘A detailed breakdown of our earning opportunity performance numbers and an in-depth analysis of success to failure conversion opportunities.’
‘Flog more homes then?’ Asks T succinctly.
‘Pretty much.’

‘It’s not rocket science.’ States poison dwarf H my rival manager, when he comes on the line mid-afternoon to let me know he’s having a cracking week. Funnily enough he never rings when sales fall-through.
‘I’m already thinking about the performance award ceremony,’ crows H odiously. ‘I’ll let you have a sip from the champagne if you like.’
My hit-list/come wish list has another name added. Perhaps the only target I’m really interested any longer, but just as unachievable.

‘It’s all about PMA.’ Chimes H gratingly. And as if to illustrate how far removed I am from the success formula, I’m thinking Property Mis-Description Act, until he senses the over-long pause and adds. ‘Positive mental attitude man, come on get with the programme.’

Maybe the bean counter is right. Maybe H is the model estate agent – albeit in miniature scale. Perhaps I should try and be a bit more like him?
‘If you want some help you could spend a day or two in my office.’ Offers H, and for a scintilla I think he’s being genuine, until he follows-up with:
‘We could do with some extra photocopying.’
If he were any more up himself he’d invert.


‘Got a valuation for you,’ Announces trainee F later. ‘Bloke has to go into a hospice or something. Got prostrate disease.’
‘It’s prostate!’ I announce haughtily. ‘Prostrate is when you lie down in submission.’
‘Whatever,’ snips F. ‘I just thought you might see eye-to-eye. Best man for the job and all that.’

As I drive without much enthusiasm to the appointment, trying to remember those about to have life-threatening treatment are less likely to quibble about the fee, I wonder if F’s malapropism wasn’t right after all? I’m hoping my gonads are ok, but if you spend your life apologising to demanding line-managers for not quite achieving figures you had no say in setting in the first place; if you fail to tell them to sling their hook and don’t have the gumption to walk with head held high - maybe you do have prostrate disease.

Plodding like an overloaded pack horse in ever decreasing circles. Stumbling, like a dehydrated man lost in a desert, hoping for the mirage of a way out of the energy-sapping journey. It may not be as immediate as testicular cancer but it removes your manhood just as relentlessly. Then I ring the doorbell.

‘You’ve cheered up.’ Observes T as I skip through the office door.
‘It’s never as bad as it seems.’ I pronounce breezily.
‘Sole agency?’ Asks T as he sees me waving key and signed agreement simultaneously.
‘2.0% and sixteen weeks,’ I boast. ‘Although we might need to be a little quicker if we want to avoid probate.’