End Of The Line - Thursday 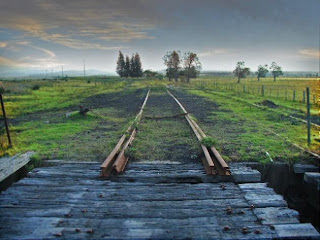 I drive into the car park of a redbrick block of identikit retirement flats, with the usual corporate nameplate outside. Apart from the fact you can find a space for your car as only visitors still run a vehicle – other than those electric buggies – I find nothing to recommend these sheltered communities. There’s no high wall with razor wire on top, but trust me, they are just as much a prison.

As usual, I’m conscious of several pairs of rheumy eyes tracking my progress from behind the net curtains, as I hobble across the tarmac. A horrible prescient vision rises, of me a couple of decades down the line, shuffling into one of these mausoleums. Of actually wanting to live in a communal hellhole, where a whist evening and a visit from the health visitor are the highlight of your week.

‘Come on up. We’re on the second floor.’ Chirrups a surprisingly sprightly voice after I’ve rung the entry-phone. I grab the door handle before the disembodied voice above rings off and leaves me outside again, unable to gain entrance before their arthritic finger slips off the buzzer.

‘Can I help you?’ Growls an officious female voice from inside a darkened cubicle. Not by the tone of your voice you poisonous old cow, I think grimly, before pasting on a sickly smile. I give the woman the flat number I’m visiting and she scowls and grunts.
‘I thought you were selling something.’ I’ll be trying, I think gloomily, but it won’t be easy. ‘The lift is over there.’ Snaps the woman, pointing a glossily manicured nail down the corridor.

The concept of retirement homes surfaced back in the eighties, when my suit trousers had turn-ups and my hair still turned up. At first, the idea of civilised protected living environments for the elderly, with care and support on-tap, seemed a winner. Then big business took over. Square footages shrunk, prices rose to the stratosphere and the service shrivelled in keeping with the residents.

I look suspiciously at the lift. Not being a big fan of the technology at the best of times. But my back is aching and the stairs are at the far end of the gloomy, cheap hotel style corridor, so I press the button. The doors eventually wheeze open, appropriately enough like an asthmatic pensioner. I step in gingerly to a smell of stale urine and cabbage, as the doors hiss shut and the cage begins a painfully slow lift.

I’m surprised the woman above answered with a “we’re on the second floor” as it indicates two of them are living in the cramped quarters. Either that or she’s another batty old bag that still won’t accept her husband is dead. Despite the fact he’s squatting on the mantelpiece in an urn. Finally the lift, a cheap installation with a slower than decent hydraulic ram system, makes the second floor. Any longer and I’d have needed the built-in seat, for a rest.

‘We’ve made a terrible mistake buying here.’ Intones the wife glumly. Her husband – in a high-backed chair – not a crematorium’s container – nods in agreement. ‘They’re all so old here,’ continues the lady. ‘And the manger is a right harridan.’
‘Jobsworth.’ Contributes the husband, confirming he’s alive – for the moment.

The clue was in the name, I think uncharitably. That and the absurdly high management charges, the hospital waiting room style dayroom on the ground floor and the worthless orange emergency pull-cords in every room. Cords that when the concept begun, alerted the warden who lived on-site twenty-four hours a day, but now connect to a remote call centre after the manager downstairs clocks-off at 5.00 pm. Just try communicating your stroke symptoms to a bored Indian with English as their second language, while lying on the bathroom floor. No wonder most of the transactions in here are probate sales.

‘I’m afraid you may have overpaid a little.’ I explain gently after I’ve explained they’ll be competing with empty units and grasping beneficiaries keen to get the cash.
‘I told you we shouldn’t have bought this box Dorothy.’ Snarls the husband, suddenly animated. ‘We’re going to die in here.’

That’s pretty much the idea.
Posted by secret agent at 6:58 AM

I enjoyed that whilst starting to think about the future in a way that hadn't occurred to me before. Funny and frightening at the same time but a good read none the less......

Just wanted to thank you for a rollicking good read. Someone recommended the blog and I thought I'd check it out to perhaps get a read on the market.... but stayed, and read back to 2008 (slow at work) for the quality of the writing and the humour.

If the blogs anything to go by the book will do well, and I may well pick up a copy myself.

Thanks for the fun.